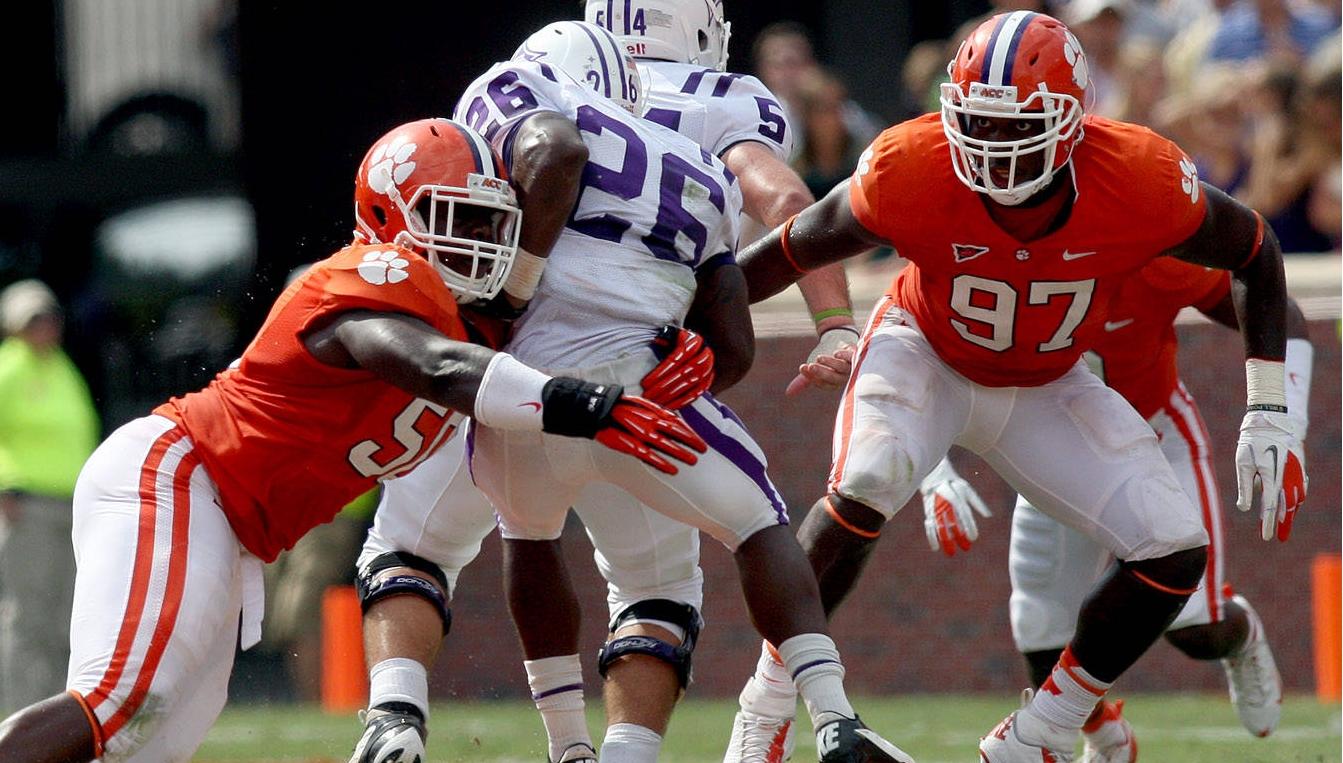 CLEMSON, SC – According to Dabo Swinney, the only thing standing between Clemson and being a great defense is mistakes.

Trouble is, this week’s opponent, Georgia Tech, thrives on taking advantage of those blunders, and the Tigers are making far too many of them to suit their head coach.

Clemson, meanwhile, ranks eighth in the ACC against the run at 176 yards per game. Still, Swinney was encouraged by his defense’s performance in Saturday’s 45-31 win over Boston College, when it allowed just 51 rushing yards on the day.

“We made significant improvement in the second half at Boston College,” he said. “We’ve still got a ways to go. But, we won one-on-one matchups. We were much more active up front. We defeated blocks. We played more confidently. We tackled better.

“So, that was improvement. And if we’ll stay on that track, then I think we have a chance to be a good defense.”

The key to being a good defense this week starts with stopping Tech quarterback Tevin Washington, who has rushed for 10 touchdowns in his last three games, including four in the Jackets’ 49-28 loss to Middle Tennessee State last week.

But while Washington is the team’s leading rusher, Tech has plenty of other options, such as running backs Zach Laskey and Orwin Smith, and Paul Johnson’s offense is designed to punish teams that attempt to focus on any one player.

While Georgia Tech’s offense was the hottest topic at the West End Zone on Tuesday, Clemson’s offense is actually averaging more points (40.2) and more yards (510.8) per game than the Yellow Jackets.

Of course, the Tigers’ offense was also flying high entering last season’s meeting in Atlanta, but turned the ball over four times, twice in Tech territory, on the way to a 31-17 loss.

“Offensively, you have to maximize your opportunities because they’re in four-down territory the whole game,” Swinney said. “We hardly had the ball in the first half (last year) because when we got it we turned it over. That’s a recipe for disaster.”

But even if the offense can avoid turnovers, the Tigers’ defense knows it has its work cut out in stopping the Yellow Jackets’ triple option attack.

In addition to the difficulty of Tech spreading the field and forcing defenses to honor all three of those options on every play, the problem is compounded by the Jackets’ offensive linemen trying to cut-block the defenders as they play their assignments.

And while he admitted his unit is still a work in progress, defensive coordinator Brent Venables said his players had to resist the urge to play any differently just because the Jackets, as he put it, “lead the universe in rushing.”

“It wouldn’t be any different had we been playing real well,” Venables said. “It’s still, you’ve got to play with discipline and not give up big plays, tackle well, win the line of scrimmage, stay on your feet, have good eyes. This week and every week, it’ll be the same message. To play good defense, you’ve got to be able to do those things.”

And playing good defense is something Swinney is fully confident that his team is both capable of and talented enough to do.

“I just laugh when people insinuate that we don’t have good players on defense,” he said. “I just laugh at it. We’ve recruited well. I’d recruit them all over again. … That’s so much baloney.”