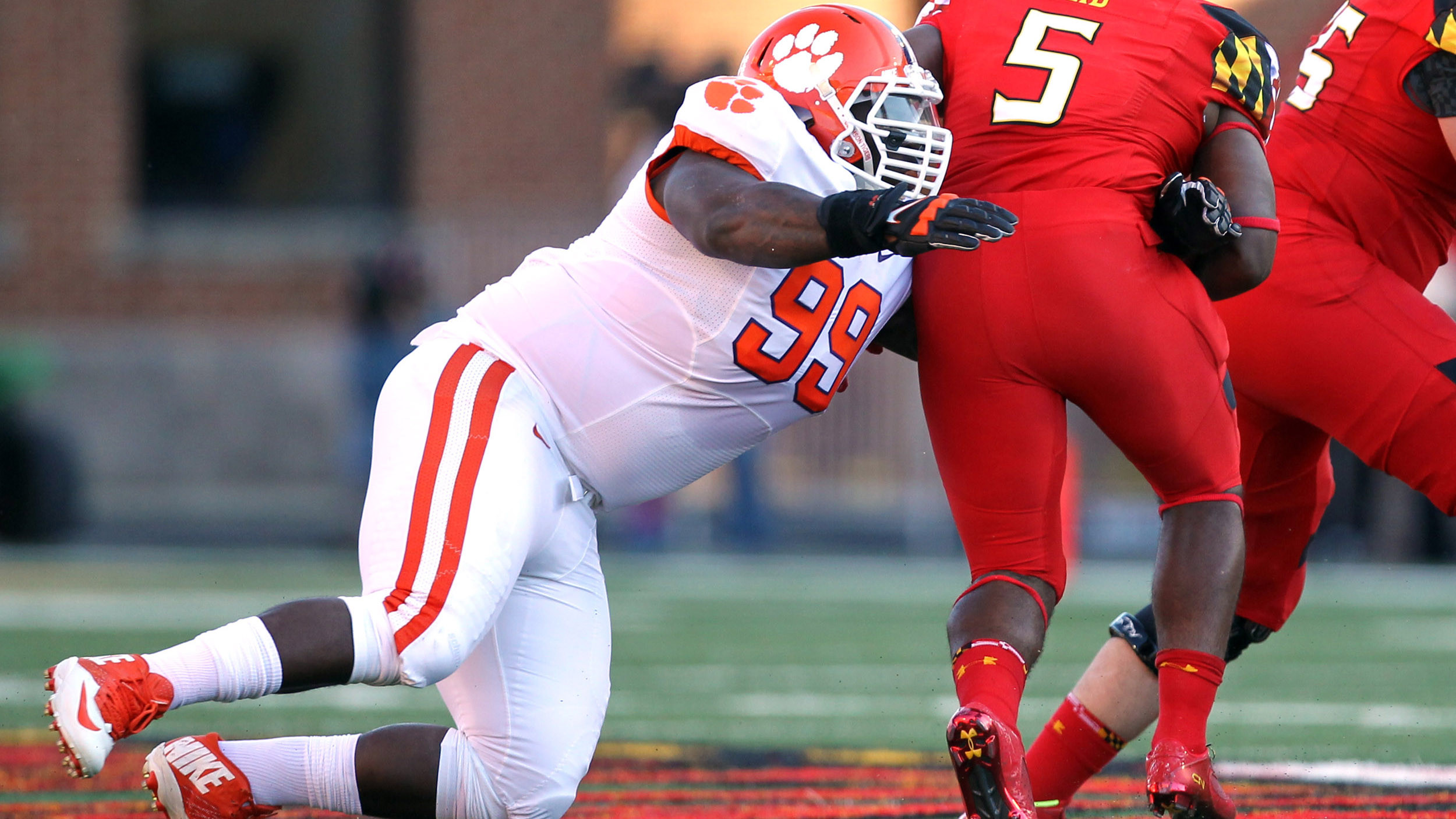 CLEMSON, SC – DeShawn Williams has been given pretty simple marching orders against Georgia Tech: Tackle the fullback dive. And do it all night long.

“Do what’s good for the team. Don’t be selfish against this type of offense,” the junior defensive tackle said.

No. 8 Clemson has made major strides on defense this season by having playmakers emerge all over the field, but Thursday night’s task will be a vastly different one.

Those players will be asked to ignore their playmaking instincts.

The Yellow Jackets (6-3, 5-2 ACC) have rushed for more yardage than any FBS team since 2008 and have been typically successful on the ground this season, averaging 311.2 yards per game, which ranks fifth nationally and is the identical number they averaged in 2012.

Clemson (8-1, 6-1) has made big gains on defense this season, as it has improved in virtually every statistical area – allowing nearly 50 yards per game fewer than in 2012 – but perhaps the most notable difference has been in terms of making big plays. It ranks in the top 10 in the country in a slew of such stats, including sacks, tackles for loss, interceptions and turnovers forced.

Against Georgia Tech, however, many of those playmaking traits will be neutralized, particularly the pass rush – led by junior defensive end Vic Beasley and his ACC-best 10 sacks – unless the Tigers can force Johnson’s offense into passing downs.

“It’s an equalizer. It really is,” Swinney said. “You can eliminate certain intangibles. … Vic Beasley isn’t going to get a lot of sacks against Georgia Tech. He might get one or two. Who knows?”

If he does, it probably means the Yellow Jackets have been forced to throw the ball more than they would prefer. They have only thrown the ball 19 times or more on three occasions this season, and those were their only three losses.

But Tech has been especially good at keeping opposing defensive playmakers at bay, as leading rusher David Sims is one of only two running backs in the nation (with at least 75 carries) who has yet to be tackled for loss.

Williams said his position coach, Dan Brooks, had instructed he and his mates on the interior defensive line to tackle the dive – meaning Sims – on every single play, regardless of whether he actually had the ball or not.

“It’s just assignment football, and with this offense, if somebody doesn’t do their job they’re going to bust one for a big play,” Williams said.

Along those lines, the Yellow Jackets have been plenty explosive in the ground game. Senior A-back Robert Godhigh leads the ACC at 11.3 yards per carry, and of his 708 yards from scrimmage, 45.2 percent have come after contact (320).

“Like Coach Brooks told us (Monday night), ‘You might get 12 tackles playing on the interior,’ because it’s a run-based offense,” Williams said. “But your job is just to keep the center off the MIKE backer or just play the cut block. You’ve just got to do what you’re schemed to do and be good at it and just whip the guy in front of you.”

On the flip side, Clemson has an offense that is plenty explosive in its own right. The Tigers are coming off a 59-point outburst at Virginia and rank 11th in the nation in total offense (507 yards per game) and 15th in scoring offense (39.8 points).

“You just don’t know how many opportunities or how many plays you’re going to get, so you know that it’s significant that you try to go out there and score every time you have the ball,” Boyd said of facing Georgia Tech’s ball-control offense.

Boyd said he is excited to take the Memorial Stadium field for the penultimate time and knows a win is essential if the Tigers hope to strengthen their hopes for a BCS bowl bid.

“It’s a defining moment for this team, this season,” Boyd said. “It’s all about finishing strong.”