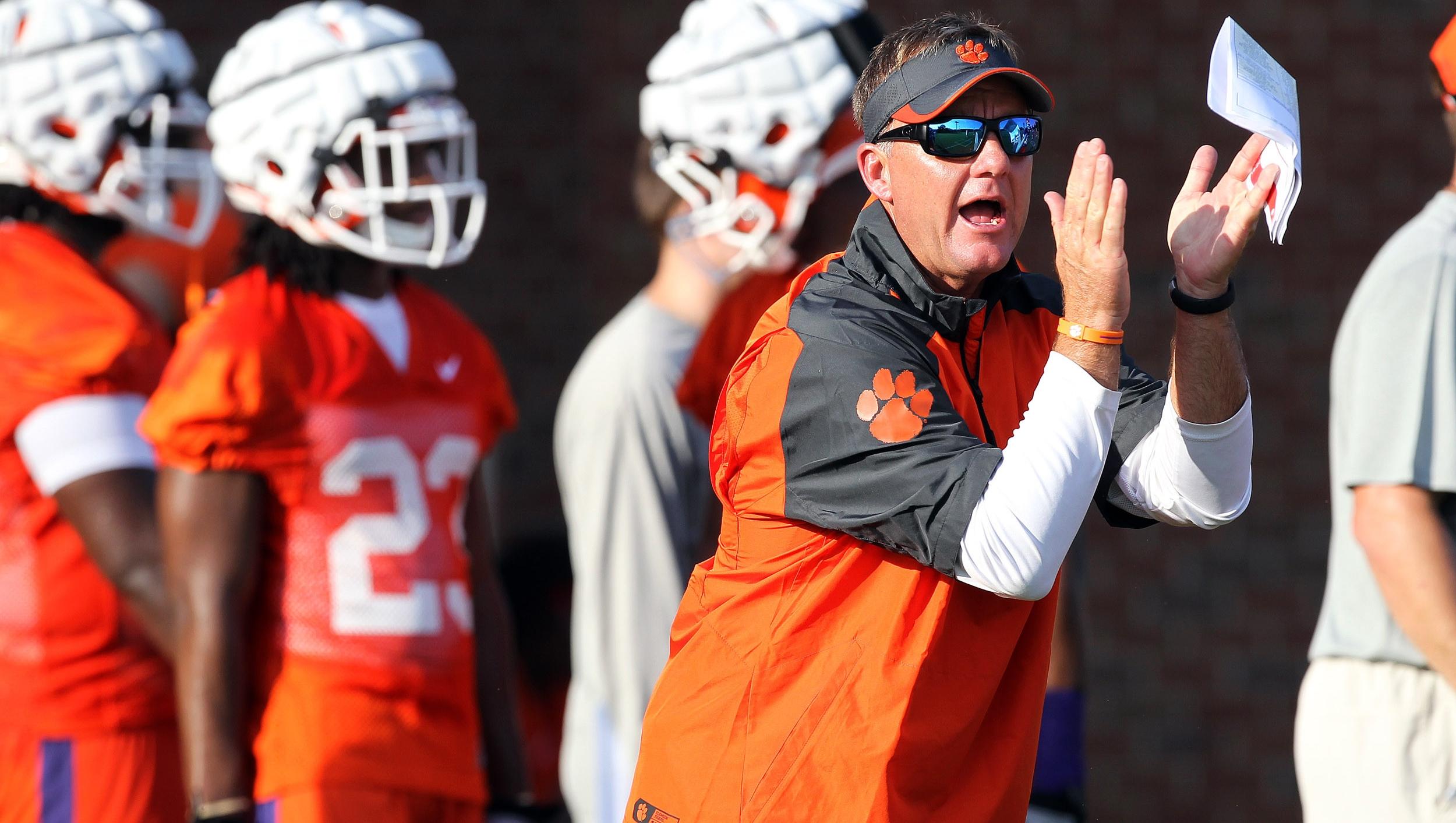 CLEMSON, SC – Clemson’s coordinators met with the media Saturday night for the first time since fall camp opened the day before, and both were reluctant to heap praise on their players.

Understandable, since the Tigers were still four days away from even donning pads.

“Everybody’s an All-American when it’s 72 and partly cloudy,” offensive coordinator Chad Morris said. “We’ll see when the pads come on here in a little bit.”

Still, Morris admitted he felt like he was having flashbacks on a couple of occasions, as two incoming freshmen made him do double takes to confirm that running back Andre Ellington and receiver DeAndre Hopkins weren’t still on the team instead of plying their trades in the NFL.

Clemson must replace both its leading rusher and receiver, respectively, but Morris said newcomers Tyshon Dye and Mike Williams bore a certain resemblance to the departed stars.

“I looked out there yesterday and saw 23, and I thought, ‘I know Andre’s not here,'” Morris said of the 205-pound Dye. “A bigger, bulkier Andre is what he looks like. He’s doing some good things. He’s lost as a goose, but he isn’t the only one.”

The 6-foot-5 Williams suffered a pulled groin Saturday and missed part of practice, but caught Morris’ eye enough to be compared to Hopkins, who set an ACC record with 18 touchdown grabs last year on his way to becoming a first-round draft pick.

“Mike Williams has definitely caught a lot of people’s attention,” Morris said. “(Freshman wideout) T.J. Green is another one. He’s kind of rugged and just doesn’t know the whole thing yet. He doesn’t know what he’s doesn’t know, essentially. But I like those two guys. I think those two guys have something to them.

“Mike Williams has made two or three plays in camp where you’d go, ‘Wow, that guy looks a little bit like No. 6 (Hopkins) out there, going up and making plays.’ He is a long way away, but that’s two good guys that we’re really excited about.”

But those compliments were the exception rather than the rule for Morris, who said even senior quarterback and reigning ACC Player of the Year Tajh Boyd left much to be desired the first two days of camp.

“He hasn’t been as sharp as I want him to be,” Morris said. “But if you had asked me that two days into practice last year, I’d have said the same thing. We’ve got to correct some bad habits he might have picked up over the summer … but I’m not worried about Tajh Boyd. We’re going to get him right. I don’t want him to look like an All-American right now. Heck, I wouldn’t have anything to do if he did that.”

One thing Morris has been pleased with is the tempo his offense has operated at. He hopes to snap the ball “four or five” more times each game than the offense did last year when it ran at a breakneck pace in averaging 41.0 points and 512.7 yards per game, both school records by a large margin.

This season, Morris hopes to run 90 to 92 plays per game.

The third-year offensive coordinator is aiming to have “90 percent” of the offensive installation completed Monday, the next time the team practices.

“They’ve got a lot on them, and they should,” Morris said. “A lot of them are three-year starters.”

Brent Venables was even stingier with his praise of individual players than Morris, managing to go at least the first eight minutes of his conversation with the media without mentioning a defender by name.

But with his voice still hoarse from directing his troops during practice, the Clemson defensive coordinator did commend his entire unit for its attitude and hunger to be better than it was last season, when the Tigers finished third in the ACC in scoring defense at 24.8 points per game.

“They’ve got a good understanding of where they are at and what it takes to get to where they want to go – just being a top-10, top-15 type of defense; and where we can go into each and every week and have an opportunity to win the game on our side of the ball; and when we’ve got to get a stop, we can count on getting it done; and guys that can trust the guy next to them,” Venables said. “That’s a process. That doesn’t just happen overnight.”

Officially, Clemson has just six starters and only two of its top six tacklers returning on defense, but there are 10 returning players on defense who started at least five games last year.

“Our guys have had really good carryover,” Venables said. “We’ve got a bunch of new, young faces as well, but a wealth of experience in that front seven, and it’s shown, as far as the tempo we practice with and pad level, fits and understanding.”

Most of those new faces are in the secondary, where eight players from the Tigers’ 2013 signing class will look to not only bolster the depth, but also make an impact on the starting lineup.

Venables said none of the eight new defensive backs had blown him away thus far, and none had “been awfully bad,” but said there was a noticeable difference in the athleticism in the secondary.

The headliner of the group is Mackensie Alexander, the No. 4 overall recruit in the country by ESPN.com, the highest ranked Clemson signee since Da’Quan Bowers was ranked first in the class of 2008.

“He has good football IQ and intelligence,” Venables said of Alexander, who missed practice Saturday with a pulled groin. “He has good instincts and ball skills and can really run, but still learning. … A big thing for young DBs is if they will be physical against the likes of Sammy Watkins, Martavis Bryant and Charone Peake, or if they play on their heels and get shoved around. A lot of young players will be in good position, but they don’t possess that strength yet.  So, we’ll see. I don’t know yet.”

Another freshman defensive back of whom much is expected is 6-foot-4, 205-pound safety Jayron Kearse, the nephew of former NFL star Jevon Kearse.

Along with safety, Kearse is working at the SAM linebacker/nickel back position on the defense, behind starter Quandon Christian and T.J. Burrell.

Stephone Anthony entered camp as the listed starter at MIKE linebacker, ahead of B.J. Goodson and Kellen Jones, while top returning tackler Spencer Shuey is the starter at WILL ahead of Tony Steward and Jones.

Highly touted incoming freshman Dorian O’Daniel is working at both WILL and SAM, according to Venables.

In Venables’ first season, the defense showed improvement, culminating in holding No. 7 LSU to just 219 yards and nine first downs in the Chick-fil-A Bowl.

Still, Venables said his players were under no illusions that they have arrived yet.

“They live in the reality, the here and now,” Venables said. “Unless they’ve got their head in the sand, (they know) we haven’t done it anywhere close to where we need to. We played well in our last game, but it doesn’t do anything good for us now.”