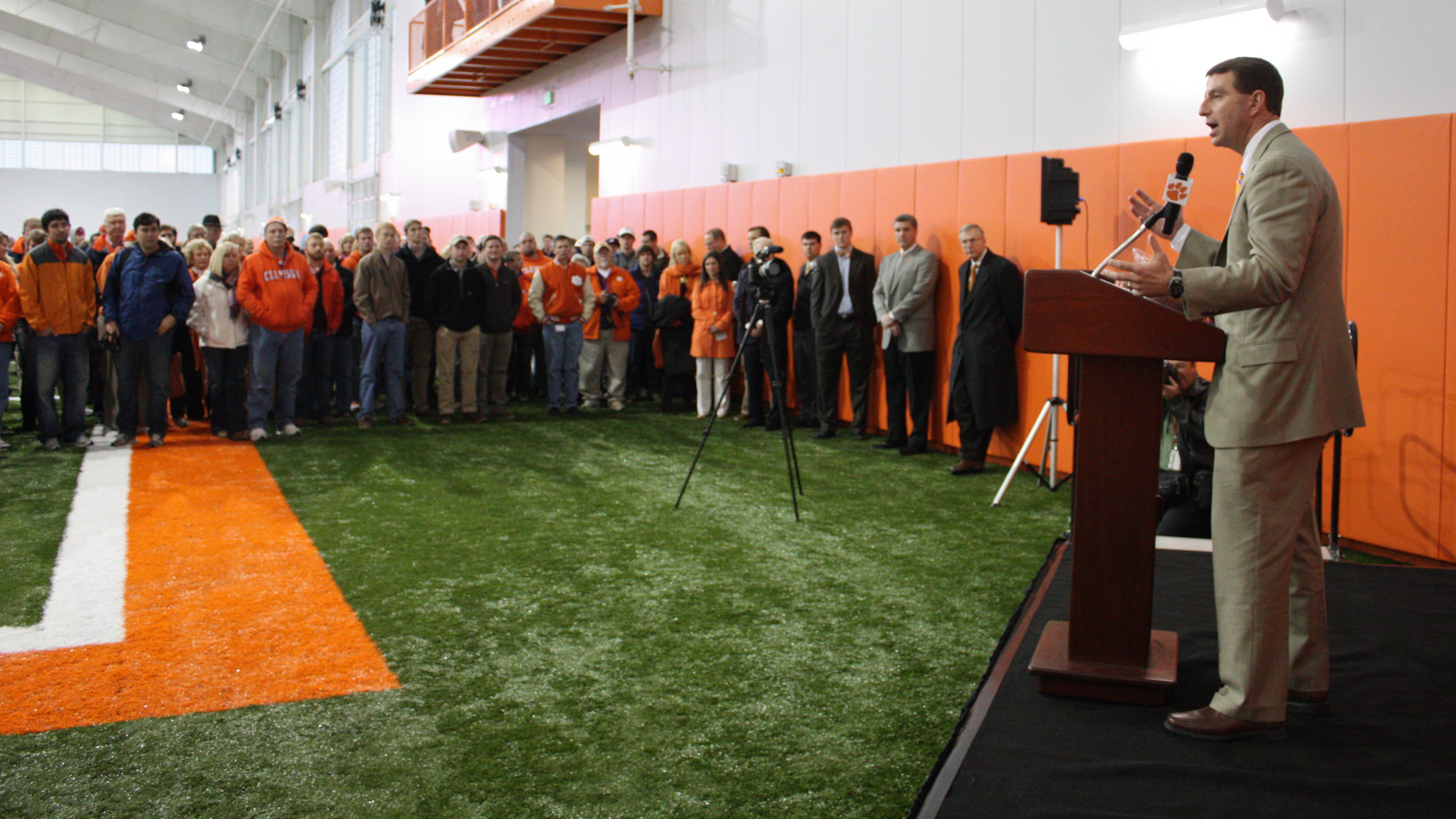 CLEMSON, SC – Given the weather Friday, it would have been difficult for Clemson to pick a better day to demonstrate exactly why it needed an indoor facility for football.

With temperatures hovering in the upper 20s and hail and sleet pelting the roof, the university held a dedication ceremony for its new Clemson Football Indoor Practice Facility, the 80,000-square-foot, $10-million structure the Tigers moved into just ahead of their victory over LSU in the Chick-fil-A Bowl to close the 2012 season.

Clemson head coach Dabo Swinney pointed out simply by virtue of the five practices his team held in the facility prior to winning that game, the highest-rated non-BCS bowl game ESPN has ever televised, it had already begun to pay dividends for the program.

“Whatever the final price tag on the building was, it’s not even close to what it would have cost to have a three-and-a-half-hour infomercial for Clemson University in front of millions and millions of people who get to watch it,” Swinney said.

Swinney was the last of five speakers at the ceremony, which the university invited fans to attend. Despite the wintry weather, Tiger fans turned out in droves to tour the new facility.

Director of Athletics Dan Radakovich, who has now been on the job for nearly two months, said the hundreds who attended the ceremony demonstrated the passion that was the very reason he wanted to come to Clemson in the first place.

“That’s why it was important to have this day open for the Clemson family,” he said. “And how apropos that we’re in an indoor facility on a lousy day outside. We didn’t plan that. But we’re going to plan a lot of other things. We have a lot of things to do here within the athletic program to keep pace with the people with whom we compete.”

The first speaker of the day was senior place-kicker Chandler Catanzaro, whose 37-yard field goal as time expired lifted the Tigers to their 25-24 win over the then-No. 7 Bayou Bengals in the bowl game.

“I cannot express how excited me and the rest of the players, as well as the staff, are to have this beautiful facility,” he said. “As Coach Swinney is always reminding us, the best is the standard here. This building clearly represents what the best is all about … and I believe this day brings us one step closer toward our goal of bringing another national championship to where the Blue Ridge yawns its greatness.”

In addition to the full-length football field housed within, the facility features state-of-the-art video and audio capabilities, a weight room that overlooks the practice field, a training room and doctors’ area, and storage areas, among other bells and whistles. There are also plans to add a “pro player” locker room on the upper level with NFL logos and televisions for former players to have their own space when they return to campus.

President of the IPTAY Board of Directors Charles Dalton said the project was one of which his organization, the athletic department’s fundraising arm, was very proud.

“IPTAY always likes big, bold, highly visible projects; we have talked to Terry Don (Phillips) from time to time about bringing us those big, bold projects – the kind of projects that directly affect our athletic program and make our athletic program more competitive, that improve us on the field and on the court, projects that people can see and put their passionate feelings behind – and I don’t know how you can get much bigger and bolder than this,” Dalton said.

Phillips, who retired as athletic director in November when Radakovich was named his successor, oversaw the completion of the project as one of his final acts of business at the reins of the athletic department.

“I want to thank our IPTAY donors, our Major Gift donors, our IPTAY Board, our Board of Trustees,” Phillips said. “This is an opportunity to say thank you to you. Your support for our athletic programs is tremendous.”

Radakovich declined to take much credit for the facility, as it was largely built and funded prior to his arrival, though he did reiterate the need for Clemson to “go faster” in terms of facility upgrades for all its athletic programs.

“All the credit for this certainly goes to Terry Don and (Associate Athletic Director for Facilities and Grounds) Robert (Ricketts) for their vision and taking Dabo’s lead here and saying, ‘This is a desire. This is a need here. How do we fill it?’ And one of the ways that it was filled here is by the generous donations of the IPTAY members and the IPTAY Board specifically allocating the money,” Radakovich said. “So, I get the opportunity to be here and see this open, but so many people did such great work here in order to get to this spot.”