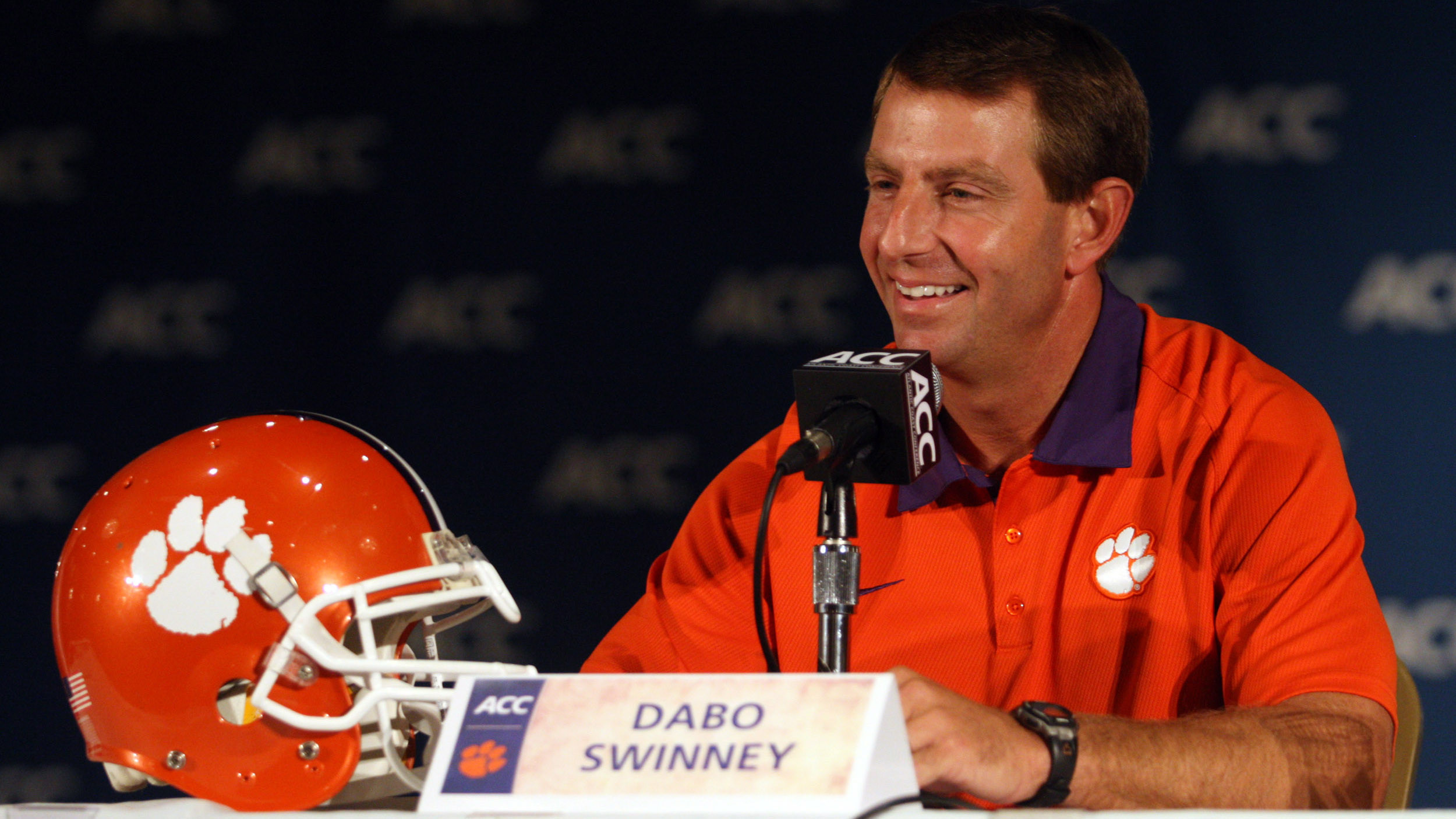 GREENSBORO, NC – Monday afternoon at the Grandover Resort, Dabo Swinney was posing for a photo with Miami head coach Al Golden when he found himself puzzled.

“Why are we taking this picture?” the Clemson head coach wondered aloud.

Clemson was also picked to win the ACC Championship by a wide margin, collecting 95 of the 120 votes cast to far outdistance Atlantic rival Florida State, which nabbed 15 votes.

But if Swinney was pleased with the news that his Tigers were back on top of their conference, albeit in the preseason, he didn’t let on in the media room afterward.

“It’s not even worth having a conversation about,” Swinney said. “I know it’s fun for people to make predictions. But all that stuff – all the preseason stuff – is based on past performance. Come November that’s when it is based on reality. That’s when it means something to me.”

Clemson quarterback Tajh Boyd was also the overwhelming pick to repeat as ACC Player of the Year. He nabbed 105 of 120 votes, and no other player tallied more than four.

Boyd and his fellow seniors are the final remaining members of Swinney’s original recruiting class dubbed the Dandy Dozen. As such, this Tiger team is the first comprised completely of players signed by Swinney.

“I’m very proud of what they’ve been able to get done,” he said. “Tajh Boyd and that group, this is the remainder of the Dandy Dozen, and all of them have been very solid players for us. We have 10 senior scholarship players this year, and all of them are very solid and have been productive guys and good leaders. They are all going to have their degree by December, and to me that’s what it’s all about.”

As far as the ACC Championship Game, the most likely scenario for the league’s title game December 7 at Bank of America Stadium in Charlotte, NC, is for the Tigers to beat the Hurricanes, according to the media.

Fifty-five voters voted for that outcome, while the next two most likely scenarios also involved Clemson – a Tiger win over Virginia Tech got 19 votes and a Tiger win over North Carolina got 18.

Still, the game that seems likely to have the most impact on who wins the conference is Clemson’s October 19 home game against Florida State. The winner of that contest has gone on to win the Atlantic Division each of the last four years and to win the league each of the last two.

“That game has been huge,” Swinney said. “Since I’ve been the head coach, the winner of that game has gone on to play for the championship, and it’s one of those games where the margin for error is very small. Every single year, it’s very small. I thought we played about as good of football as we could have played for three quarters down there (last season), and all of a sudden you give up a 90-yard kick return and a pass over the top and they have the momentum. A few plays within a game can really make the difference when you’ve got two good teams battling it out, and that’s the way it is with Clemson and Florida State.”

With seven starters back on offense, including Boyd, and 10 players who started at least five games last season back on defense, it’s no surprise Clemson has such ballyhoo heading into the fall.

But while Swinney admitted it was nice that his Tigers had earned enough respect to garner such high expectations, he also noted they had even higher expectations for themselves.

“We have to put three, four, five or six quality years together where when people sit down and are trying to decide who their top 10 is, Clemson is always in that mix,” Swinney said. “Maybe we’ve made a little progress toward that, but we’re not there yet. We’ve still got a lot of work to do to become that type of program, so we need to go out and have another great season this year.”