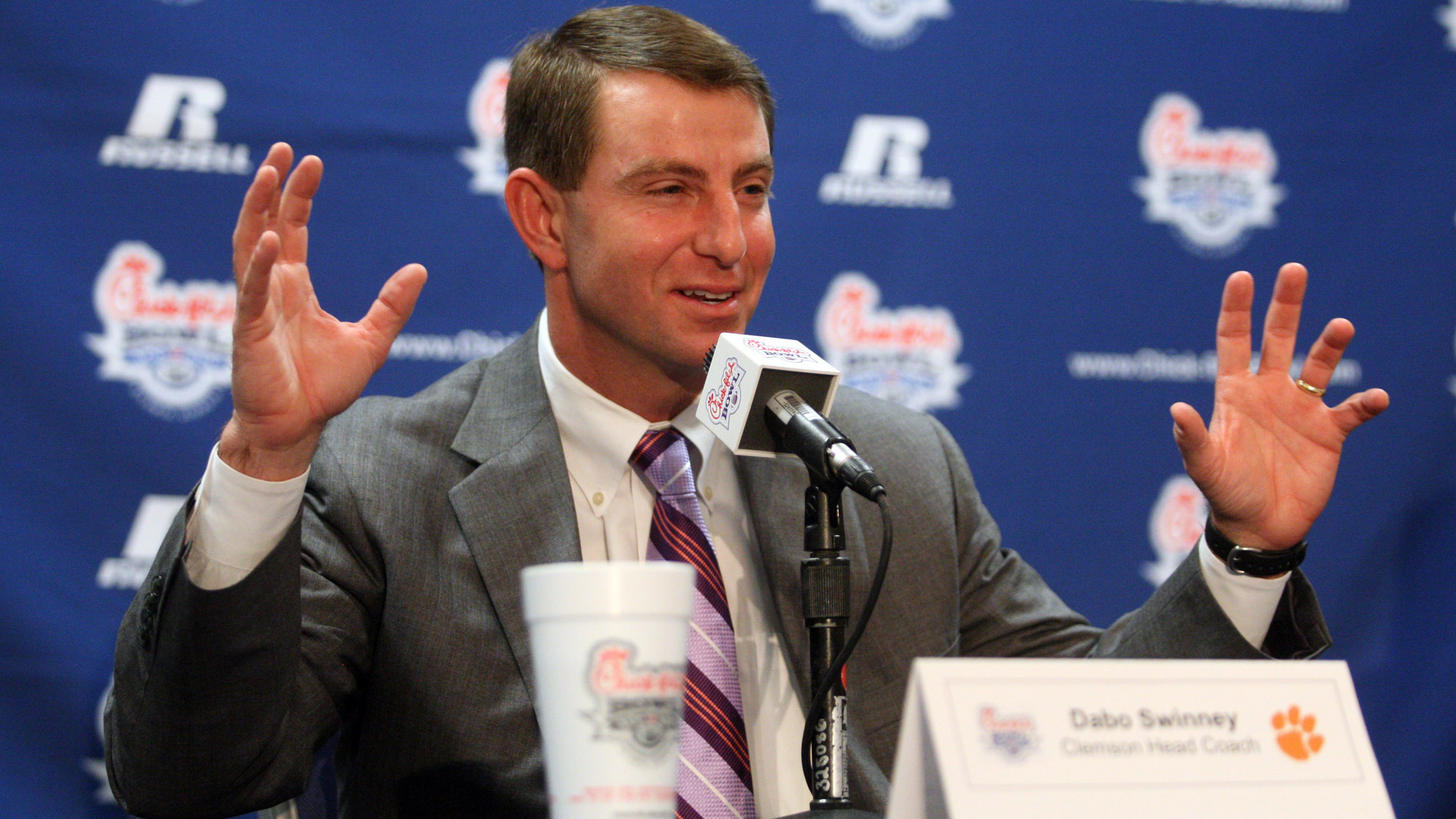 ATLANTA, GA – This year’s Chick-fil-A Bowl has been frequently billed as a clash of contrasting styles: Clemson’s fast-break offense against LSU’s smash-mouth style.

Dabo Swinney doesn’t have a problem with that. Just don’t call his Tigers a finesse team.

“I don’t subscribe to the theory that you’ve got to line up in the I-formation to be physical,” Swinney said. “I don’t think that’s the case at all. We pride ourselves on being a physical football team. There are lots of different styles of play in college football. I think that’s what makes college football so much fun: It’s not a cookie-cutter product.

“At the end of the day, you’ve got to do what gives your team the best chance to win. That may be different depending on where you are, what your personnel is and what your resources are and all those sort of things. But I’m very confident in our style of play and how we play the game.”

Swinney and LSU coach Les Miles took the podium together for a final time prior to Monday’s game at the Sheraton Atlanta Hotel on Sunday morning to preview the first matchup between two 10-win teams – both have 10-2 marks – in Chick-fil-A Bowl history.

But while Swinney takes exception to the suggestion running a hurry-up, no-huddle offense means his team isn’t physical, that isn’t in question when it comes to LSU.

Miles was told Sunday that Clemson defensive coordinator Brent Venables had said the previous day LSU’s objective was to “pound you into oblivion.”

Both coaches indicated they had put significant work into preparing their team for a style of football that, at the least, goes about being physical in very different ways.

Swinney admitted his team had geared up the physicality of its practice sessions to help prepare for the Bayou Bengals.

“If you’re going to play a team like LSU that has a physical style of play that you don’t see every week, you’ve got to prepare for that. So, that’s what we tried to do in practice.”

Likewise, Miles said his team had focused on preparing for the speed of Clemson’s offense, and characterized the challenge of doing that as two-fold – both the speed they snap the ball with and the speed of their players once the ball was in play.

“It’s really both,” Miles said. “They have the ability to run plays in rapid succession. Get on the ball and snap it.  And they have great speed. The preparation for that is something we’ve undertaken for some time. You must get ready for them to snap the ball. And that’s: cleats north and south, helmet down looking at the ball, understanding your assignments, and doing it like that (snaps fingers). That’s certainly something that we’ve worked hard on to get accomplished. We’ll find out Monday night how successful we’ve been.”

In other bowl week festivities, LSU pulled even in the Battle of the Bowl Week competition at 2-2 by winning the Milkshake Combine between the offensive lines on Saturday night. Due to a penalty on Clemson for what bowl spokesman Matt Garvey called “improper construction” of a milkshake, LSU won with a time of 2:47.

But Clemson then won the Football Feud contest – styled after the long-running game show “Family Feud” – by a blowout score of 200-50 to take the overall Battle of the Bowl Week competition 3-2.

The teams were also set to travel to the Martin Luther King, Jr. Center on Sunday afternoon to continue the bowl week activities.

Interestingly, Phillips was responsible for giving both of the coaches in this year’s game, Swinney and Miles, their first opportunities as a head coach.

“Terry Don Phillips hired an assistant coach many years ago and said, ‘We’re going to give you a chance to see if you can be a head coach,’ and did the same with Coach Swinney, and I would have to think that we’re both very much indebted to the man and we’d both like to say thanks,” Miles said. “He took a chance on two assistant coaches, and they happen to be about to play each other in a very prestigious bowl game.”

Still it all comes down to the game on the field at the Georgia Dome on New Year’s Eve, and Swinney characterized the matchup as an opportunity for his team to make a statement in terms of national relevance.

“They’re a national championship-caliber team,” Swinney said. “We’re not quite there yet, but I do think we’ve made great progress. I think you’ve got to at least acknowledge that we’re making some progress. We’re a top-15 team. If you’re going to be a top-10 team, you have to step up and win games likes this at some point. But that’s easier said than done. We’ll have to play very well.”