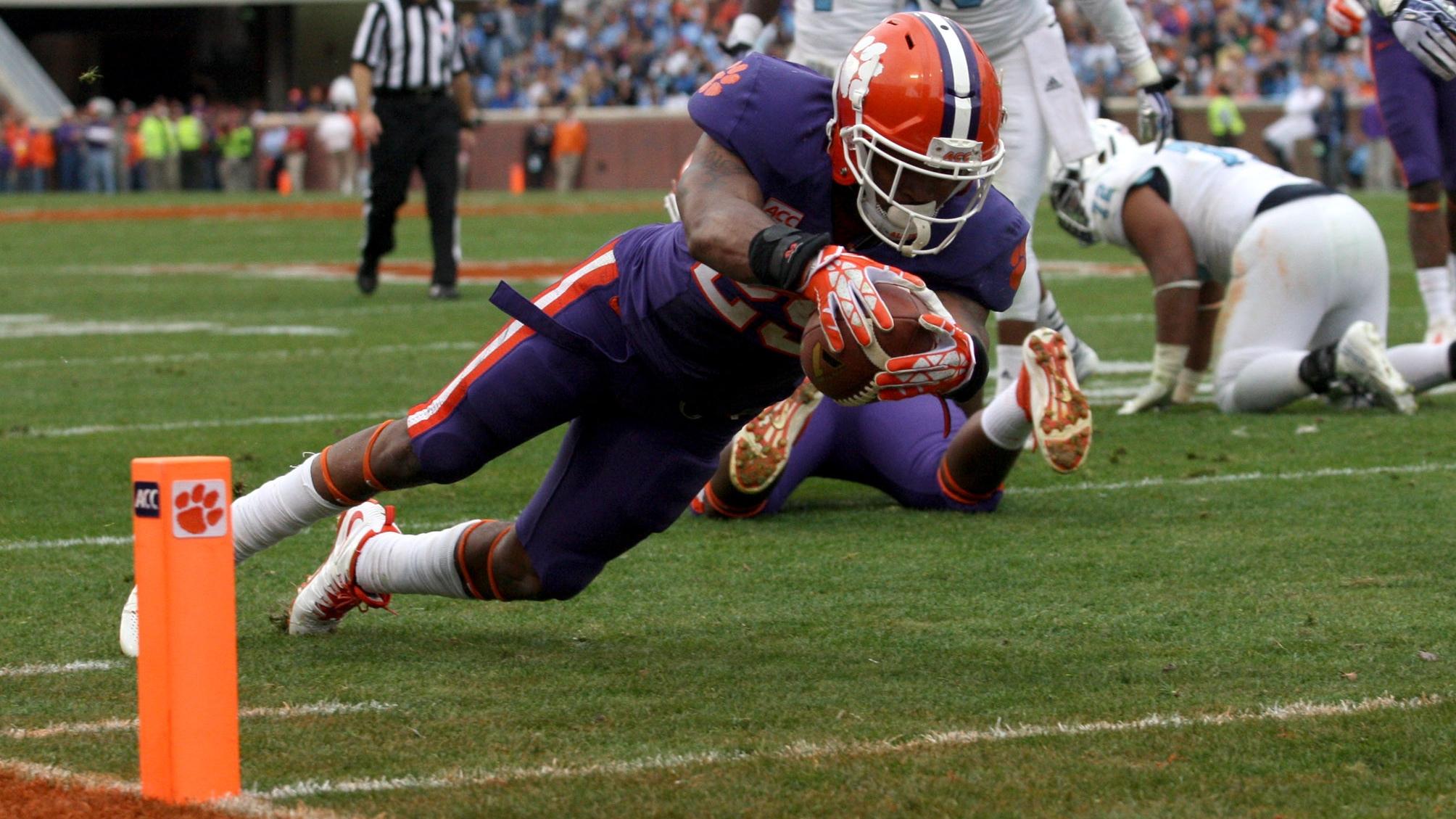 CLEMSON, SC – Tajh Boyd feels Clemson is playing at the highest level going into the South Carolina game that it has since he arrived on campus.

The fourth-ranked Tigers are averaging 51.5 points in their last four contests since their only loss of the season to Florida State, and across that span Boyd has thrown 13 touchdowns to just three interceptions.

“We’ve been hitting on all cylinders at the right time,” the record-setting senior said. “We played some good ball in September and October, but we’re playing our best ball right here in November.”

Clemson head coach Dabo Swinney admitted nobody wants to beat South Carolina worse than he does, but he also knows wanting to win won’t nearly be enough.

“We’ve gotten beat four years in a row, and nobody wants it to go to five,” Swinney said Tuesday at his news conference to preview Saturday’s game in Columbia. “We want to win the dang game. But wanting isn’t going to do it.”

Instead, the Tigers (10-1) are focused on fixing the on-field factors that led to those results.

“I watched (last year’s) game this week, and I missed some throws, we didn’t protect as well, we didn’t run as well, we just didn’t do anything we’re accustomed to doing and didn’t perform to our capabilities,” Boyd said. “For whatever reason it happened that way. But I’m very confident in this team. I feel like this is a different team, and we’ve just got to find a way to get it done.”

Perhaps the biggest key to offensive execution versus South Carolina will be the Tigers’ success in blocking a stout defensive line led by Jadeveon Clowney and Kelcy Quarles, who have combined for 19.5 tackles for loss and 9.0 sacks this season.

“That’s definitely a big factor in the game,” senior offensive guard Tyler Shatley said. “Another one is being able to run the ball. That will help take the pressure off Tajh, as well. If we can run the ball and they’re not expecting pass every time, that will take a lot of pressure off of him.”

Senior running back Roderick McDowell is coming off his third 100-yard rushing game of the season and admitted a victory Saturday would be an especially sweet way to end the regular season.

“To come away with a win, I think that would really be the stamp of my career and of the season, not just for me, but for the program,” McDowell said.

Boyd’s primary target all season has been Sammy Watkins, who became Clemson’s career receiving yardage leader against The Citadel last week and has at least one touchdown reception in seven of his last eight games.

But Boyd said a big part of the Tigers’ recent play has been the improved chemistry between he and receivers Martavis Bryant and Mike Williams, which has prevented defenses from focusing all their attention on Watkins.

“Sammy being involved, it just comes throughout the course of a game,” Boyd said. “Anytime you try to put too much emphasis on it, it deters from what you’re trying to do as an offense. Sammy’s going to get the ball, but you can’t force-feed it to him. … We have other guys, NFL-caliber players, guys who are just outstanding, and it’s going to take a joint effort and a team effort for us to win the game.”

On the defensive side of the ball, Clemson’s top task will be stopping the Gamecocks’ ground game, which has averaged 211.2 yards per game and 5.1 yards per carry for the season, led by Mike Davis and his 1,112 rushing yards and 10 touchdowns.

“I’m very impressed with the year that they’ve had running the football,” Swinney said.

The Clemson head coach said perhaps the biggest reason to believe his team had a chance to end its rivalry skid was the improved play of the defense.

The Tigers rank 18th nationally in scoring defense (20.2 points per game), lead the country in tackles for loss (9.6 per game) and rank ninth in turnovers forced (26).

Saturday’s game (7 p.m., ESPN2) will be the first clash of top-10 teams in the history of the series, as the Gamecocks enter the game ranked No. 9 in the coaches poll.

South Carolina has won 17 straight games at Williams-Brice Stadium entering the contest, which is a school record and the longest home win streak in the country.

“We all know what this game’s about,” Swinney said. “But wanting to win doesn’t get it done. We’ve got to play great football, we’ve got to make big plays at critical times, and we’ve got to take care of the football. This is why you play, why you coach – to be in games like this.”