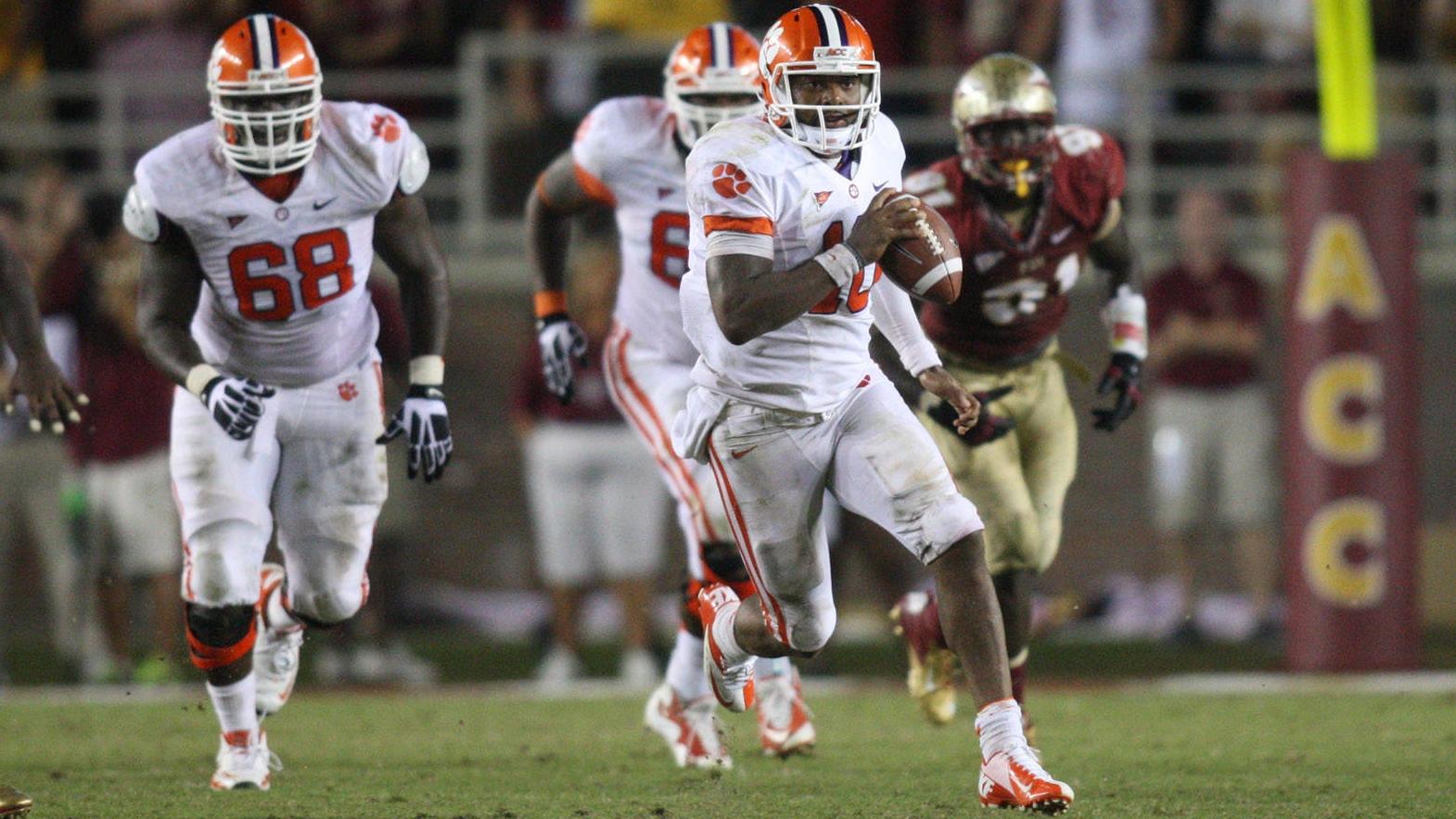 Exclusive: Boyd Rallies Tiger Troops Ahead of BC Game

CLEMSON, SC – Tajh Boyd celebrated his 22nd birthday Tuesday, but the gathering he held for his Clemson teammates the previous afternoon wasn’t for blowing out candles or opening gifts.

Rather, Boyd called a players-only meeting Monday to send a simple message: “We don’t want one loss to define our season.”

After Clemson lost to Atlantic Division rival Florida State in a clash of top-10 teams in Tallahassee, Fla., on Saturday, Boyd says he felt the need for a preemptive strike against any finger-pointing that might take place in the wake of the 49-37 defeat.

Senior center Dalton Freeman said the team meeting was a chance for the players to clear the air within the locker room after the defeat.

Five of the seven meetings between the teams since Boston College joined the ACC in 2005 have been decided by a touchdown or less, and Clemson head coach Dabo Swinney knows his team can ill afford to let the loss to FSU linger if it hopes to nab just its second win in Chestnut Hill in league play.

Clemson lost 16-10 in its most recent trip in 2010 after failing to score an offensive touchdown, and Boston College leads 6-5-1 in the series in games played in Boston.

“It’s going to be a huge challenge for us, especially coming off the disappointing loss,” Swinney said at his news conference Tuesday to preview the game. “I think everybody knows we’ve only won once up there. And the one time we won was a wild one. This is a team that’s had an open date, and I don’t have any doubt that we’ll get the very best that they’ve got.

“The big thing is I want to see our team respond like a champion. I want to see us respond and get back to work, and go up and play like I know we’re capable of.”

Unlike most of the Tigers’ previous trips to Boston, however, this year’s meeting has the look of a shootout. Clemson comes in ranked third in the ACC in scoring offense at 39 points per game, while the Eagles lead the league in passing offense behind quarterback Chase Retting (317 pass yards per game) and receiver Alex Amidon (122 yards per game), both of whom also lead the conference in those categories.

“Their offense, this is not your typical Boston College,” Swinney said. “I don’t know the last time you look up and they are leading the league in passing. I’m very impressed with them. The quarterback has got a big arm, very efficient, knows the offense and really understands what they’re trying to do. … Amidon, he’s a baller. They get it to him a lot of different ways. He’s a very good football player.”

On the other side of the ball, Boston College has remained strong despite the loss of last season’s ACC Defensive Player of the Year, linebacker Luke Kuechly, to the NFL.

“Kuechly is gone,” Swinney said with a laugh. “Thank goodness.”

In his place, senior linebacker Nick Clancy leads the country in tackling (14.33 per game) and junior Kevin Pierre-Louis ranks sixth (12). Despite those numbers, the Eagles have been vulnerable at times, ranking eighth in the ACC in total defense at 389.3 yards allowed per game.

“Defensively, not much has changed – just typical BC,” Swinney said. “They’re a typical base 4-3, not much changing personnel. They line up and do what they do.”

As for the Tigers’ own defense, Swinney admitted there is plenty of work to do on that side of the ball, after allowing 667 yards of total offense to Florida State.

The head coach said injuries and attrition had forced some of his younger defenders into roles they hadn’t been quite ready for, but he is confident they soon will be. In the meantime, Swinney said the Tigers’ top priority is improving their tackling, which was a big reason Florida State was able to rush for 287 yards last week.

“Sometimes it’s like a rash,” Swinney said. “It can spread quick and before you know it you’ve got 10 missed tackles.”

With the loss to the Seminoles now in the rearview mirror, Swinney said he’s been pleased by how his players have handled it – by rallying around each other and going back to work.

“We’re not a great team right now, but I do think we have a chance to really improve in a lot of areas that we’re going to have to,” he said. “I like how they responded (Monday). That is a good sign, when you see the hurt in their eyes, that they care. … It’s disappointing when one doesn’t go your way, but you have to respond to everything.”