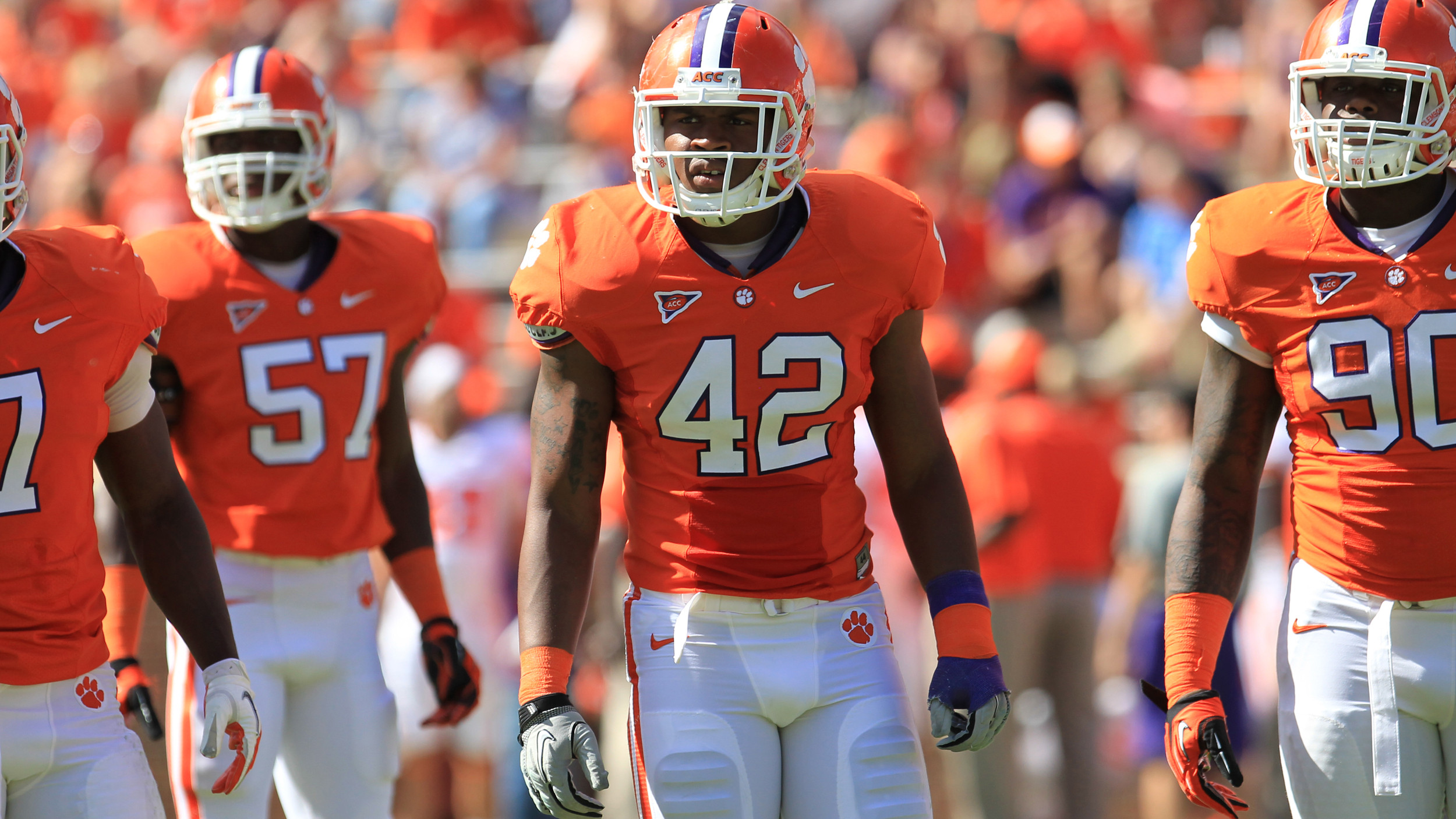 EXCLUSIVE: Anthony Not Taking Second Chance at Starting for Granted

CLEMSON, SC – Stephone Anthony entered fall camp atop Clemson’s depth chart at middle linebacker, but is quick to downplay the notion he is the favorite to start there in the season opener against Georgia.

“I wouldn’t call me a frontrunner,” he said recently. “I’m still competing every day. I’m just taking this thing one day at a time.”

Anthony knows firsthand how fleeting the status of starter can be.

The Polkton, NC, product finished fourth on the Tiger team with 77 tackles in 2012, but lost his starting job at middle linebacker to Spencer Shuey after six games.

“He got beat out, and sometimes it takes a little inspiration to get the transformation that you want,” head coach Dabo Swinney said of Anthony. “And his inspiration was the sideline.”

Anthony recorded 46 tackles in the Tigers’ first five games of 2012, including three double-digit-tackle outings, but was pulled in favor of Shuey midway through the Georgia Tech game.

Clemson trailed 31-30 in the fourth quarter that day. But after it scored a go-ahead touchdown, Shuey diagnosed an option play seconds later and hauled down Orwin Smith for a safety that gave the Tigers back the ball and, more importantly, a two-possession lead with 10:19 to go.

Shuey never relinquished the job and went on to finish second on the team with 93 tackles. The defense took a turn for the better, capped off by holding No. 7 LSU to just 219 yards and nine first downs in the Chick-fil-A Bowl.

“It was difficult to adjust to, but whichever guy is the best one to play – that’s the guy,” Anthony said. “You accept that. It humbles you, and you just keep going.”

With the graduation of top tackler Tig Willard, Shuey shifted this spring over to fill his void at weakside linebacker, which cleared the way for Anthony to regain his starting job in the middle.

By all accounts, Anthony is making the most of the second chance.

“He’s a great, great player,” Swinney said. “It was good to see him respond the right way – he went back to work. He lost his edge a little last year. But he’s been awesome. He had a great spring and has had a great camp so far.”

Anthony came to Clemson with plenty of ballyhoo. He was tabbed a First-Team High School All-American at Anson High School by both Parade and USA Today, and ranked the No. 1 outside linebacker in the nation by ESPN.com.

He started three games and made 32 tackles as a true freshman before taking over the starting job at MIKE linebacker as a sophomore. This season, Anthony has a new jersey number – having changed from the No. 12 he wore in 2011 and 2012 to No. 42 – and a new outlook as well.

“I’m just enjoying it and having fun with the guys,” Anthony said. “It’s just a learning curve, and I feel like I’ve learned a lot from last year to this year.”

Shuey and Anthony are the Tigers’ top two returning tacklers and are now playing alongside each other instead of competing for playing time.

“That’s my brother there,” Anthony said. “He keeps me straight; I keep him straight. Our strengths complement each other real well, and he’s able to correct me, and I’m able to correct him – and we just keeping growing as one.”

Anthony and Shuey are two of 10 returning players on Clemson’s point prevention unit that started at least five games last year, and that experience is a major reason the Tigers believe they will be much improved on defense in 2013, their second season under coordinator Brent Venables.

One area Clemson excelled in last year was getting off the field, as it led the ACC in both fourth-down and red-zone defense.

“Guys embrace that,” Anthony said. “We call those ‘money downs,’ so it’s time to get off the field.”

But the junior said the defense allowed far too many big plays, which led to finishing in the middle of the pack among ACC defenses in total defense (396 yards per game).

“We have to limit our big plays,” Anthony said. “We had way too many last year, and that’s probably been one of the primary focuses that we had coming into this year. … A lot of it was pre-snap and just mental errors.”

But he believes the Tigers will be much improved in that area this season, and said there are a number of players who have improved tremendously as individuals, too.

“There’s a few guys out there – Vic Beasley, Grady Jarrett, Travis Blanks, the entire defense is going to be good,” Anthony said. “We’re taking this thing one day at a time, and we’re going to grow together.”

With that, his coach says Anthony himself is one of the players leading the charge.

“He’s becoming the leader out there, which is what you would expect Stephone to do going into his junior year,” Swinney said. “He is practicing like he’s on a mission, so hopefully he will continue to do that and get the results on the field.”