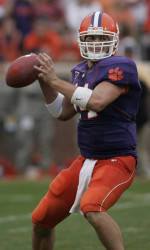 ESPNU To Air “Out with the Old, In with the New” Featuring Clemson Saturday

ESPNU is scheduled to air a program titled “Out with the Old, In with the New” on Saturday and Sunday, June 23-24 that will feature Clemson football players. The program is a tribute to college football’s graduating seniors and their respective high school recruit replacements. Will Proctor’s performance for Clemson against Boston College on September 9, 2006 and Willy Korn’s performance for Byrnes High School against Belle Glades Central will be included in the show. The Clemson segment will air on ESPNU between 12:00 p.m. and 3:00 p.m. on Saturday.