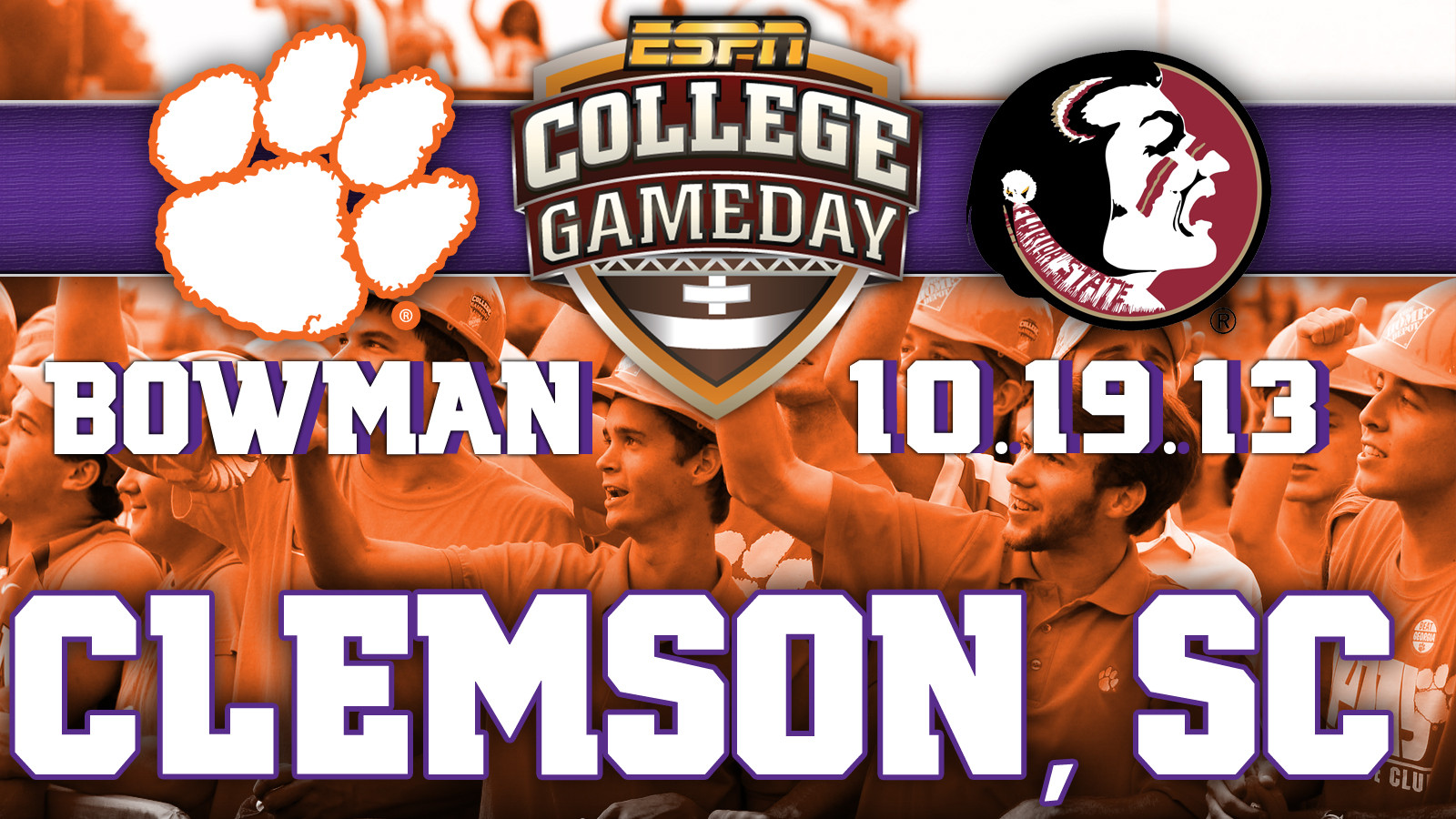 CLEMSON, SC – For the second time this season, ESPN’s iconic college football pregame show, College GameDay Built by The Home Depot, will be in Clemson this weekend for the matchup between #3 Clemson and #5 Florida State.  The show will run from 9:00 AM to 12:00 PM on Saturday.  The show will originate from the north end of Bowman Field and precede the Clemson vs. Florida State game at 8:00 PM on ABC.

It will mark GameDay’s third appearance in Clemson, as GameDay was in Clemson on August 31, 2013 prior to the Tigers’ contest against #5 Georgia.  It also aired from Clemson on October 21, 2006 before Clemson defeated Georgia Tech.

Saturday’s show will be the second broadcast from Clemson this season and will be the first time GameDay originates from the same location twice in one season since 2007.  It will also mark the first time that GameDay is at the same site twice within the first eight weeks of a season.

Information for Fans Attending ESPN College GameDayFan access to Bowman Field will be allowed beginning at 6:00 AM on Saturday.  It is important to note that fans will not be able to camp overnight on Bowman.  Clemson faculty, staff, students and fans that are IPTAY donors are welcome to park in their assigned IPTAY parking space beginning at 8:00 AM.  Parking for non-IPTAY donors is available in one of three areas designated for general public parking on football game days: Douthit Hills (behind the Clemson House), Kite Hill or the C-1 Lot.  (Click HERE to view the parking map.)

About College GameDayIn its 27th season and 21st on the road, the award-winning College GameDay pregame show originates each Saturday from the site of the day’s best game or the game with the most compelling storyline. The three-hour program is hosted by Chris Fowler with analysts Lee Corso, Kirk Herbstreit, Desmond Howard, David Pollack, and others.

Clemson ESPN GameDay GearClemson ESPN GameDay gear can be purchased at the Official Online Store of Clemson Athletics on ClemsonTigers.com, as well as at Tiger Town Graphics in downtown Clemson and at the Barnes & Noble bookstore on the Clemson campus.  On gameday, gear will also be available in the novelty stands at Memorial Stadium, WestZone, and Littlejohn Coliseum.