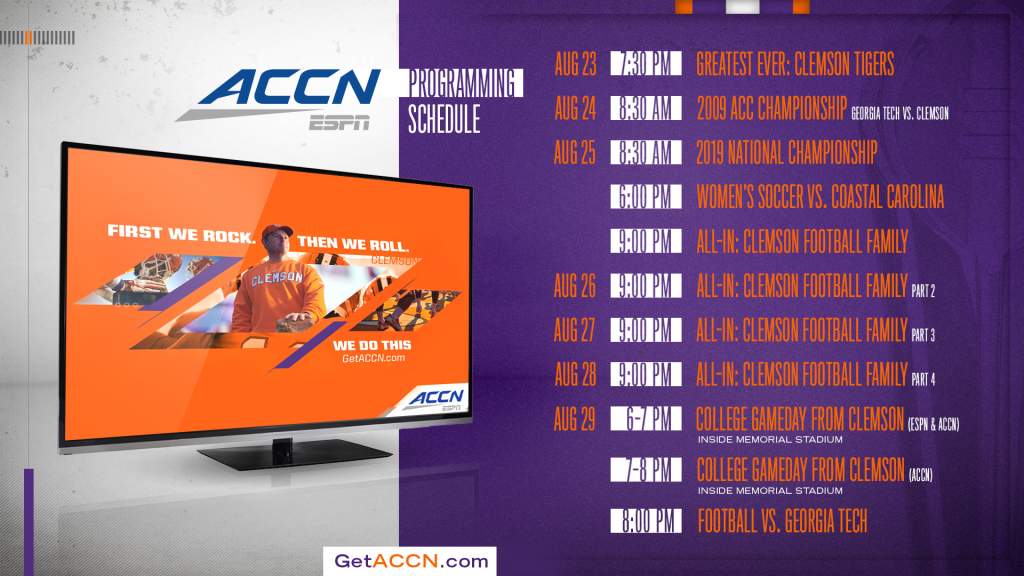 Have the ACCN? To find out, visit GetACCN.com.

Coverage of ACC football on ACC Network (ACCN), the new, 24/7 national platform launching on Thursday, Aug. 22, will be substantial throughout Weeks 0 and 1 of the upcoming college football season. Programming highlights include All ACC Watch Party, the debut of The Huddle – ACCN’s signature football show, and a special edition College GameDay Built By The Home Depot live from Clemson.

GameDay will be live from Clemson, S.C., home of the reigning College Football Playoff National Champion, in advance of the Georgia Tech at Clemson game on Thursday, Aug. 29 at 8 p.m. ET on ACCN, marking the inaugural football game on the new network.

The GameDay set will be located on the concourse level of Memorial Stadium from 6-8 p.m. The program will air exclusively on ACCN from 7-8 p.m., leading into kickoff, while the first hour of the show will be on ESPN and ACC Network from 6-7 p.m.

The Huddle team of host Jac Collinsworth, analysts Eric Mac Lain, EJ Manuel and Mark Richt, will be on the field of Memorial Stadium providing insight and analysis pregame, with a presence on GameDay, and at halftime. Additionally, the crew will host an exclusive one-hour postgame show with full analysis and live guests from the stadium on ACCN.

Dave O’Brien and Tim Hasselbeck will call Georgia Tech at Clemson with sideline reporters Katie George and ESPN’s Maria Taylor for the first league game of the season.

Packer and Durham Live From Clemson

ACCN’s daily morning show Packer and Durham hosted by Mark Packer and Wes Durham will be live from Clemson on Thursday, Aug. 29 from 7-10 a.m. delivering news and commentary from around the ACC’s 15 institutions.

GameDay is Back in Tiger Town

GameDay, beginning its 26th season this year, returns to Tiger Town for the first time since October 1, 2016 when Clemson defeated Louisville, 42-36. The pregame show will air live form inside Memorial Stadium.

About ACC Network
Owned and operated by ESPN in partnership with the Atlantic Coast Conference, ACC Network (ACCN) is a new 24/7 national network dedicated to ACC sports launching on August 22, 2019. Approximately 450 live contests including 40 regular-season football games, 150 men’s and women’s basketball games, and 200 other regular-season competitions and tournament games from across the conference’s 27 sponsored sports will be televised annually, plus a complement of news and information shows and original programming. Together, the ACCN and its digital platform, ACC Network Extra (ACCNE), will feature 1,350 ACC events in its first year. ESPN has been televising ACC content since 1979 and has exclusive rights to every conference-controlled game across all sports and championships.

*Carriage agreements are also in place with the following video providers: DIRECTV, Google Fiber, Hulu Live TV, Optimum by Altice, PlayStation Vue, Optimum by Suddenlink, TVision, Verizon Fios, members of the NCTC, NRTC, Vivicast and YouTube TV, among others. All ACCN games will also be available on the ESPN app to authenticated cable subscribers. Fans interested in learning more about ACCN can visit www.GetACCN.com.