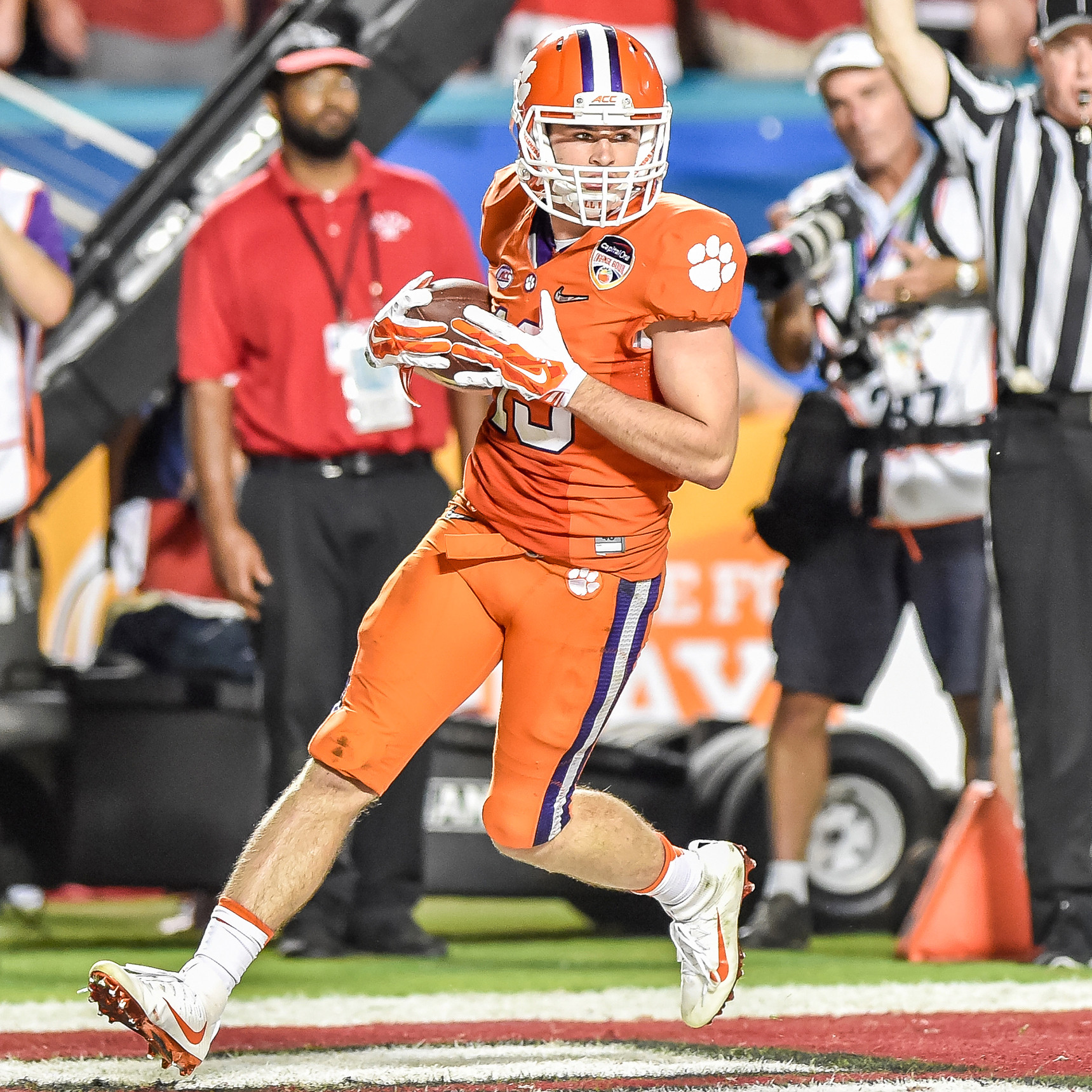 Hunter Renfrow is living proof that things happen for a reason.

Offered a preferred walk-on spot at Clemson following his junior season at Socastee High School in Myrtle Beach, S.C., Renfrow could not help but notice a full scholarship had been extended to a player with a similar likeness while the two were taking part in one of the Tigers’ annual summer camps.

“I remember coach (Chad) Morris showing him around and offering him a scholarship,” recalled Renfrow. “I was very envious of that.”

The other camper ultimately signed a national letter of intent to play wide receiver at one of the top institutions in the SEC, while Renfrow accepted Clemson’s offer as a preferred walk-on at the same position.

Few could have predicted the results that followed.

The SEC wideout played two seasons on scholarship, totaling just 21 receptions before transferring at the conclusion of his sophomore season.

Renfrow redshirted his freshman year, but was offered a full scholarship by head coach Dabo Swinney in a team meeting during August camp prior to the 2015 season. He went on to total 33 catches and five touchdowns during Clemson’s historic run, with two memorable scoring grabs against Alabama in the national championship game.

“When you get your opportunity, you’ve got to be able to perform, and fortunately he has been able to do that,” said Hunter’s father, Tim Renfrow, an outstanding athlete in his own right at Wofford.

Tim starred in two sports in a time when the Spartanburg-based school was an NAIA institution. In 1981, he played in Memorial Stadium during Clemson’s national championship season and intercepted a Homer Jordan pass. In fact, he set Wofford’s season (8) and career (19) records for interceptions, marks that still stand today. On the baseball diamond, his speed was well known. He stole 39 bases in 1981, also a Terrier single-season record.

Hunter has over 60 first cousins on his father’s side of the family alone, a number Tim and his son are quick to credit for his love of athletics.

“Hunter’s a pretty quiet kid, but very competitive,” said Tim. “A lot of that was just growing up competing in the back yard against his brothers and sisters, and cousins.”

Tim went on to coach football and eventually held a dual role as athletic director at Socastee High School, where Hunter further developed his fondness for sports.

“My dad was coach, so on Friday nights when his games were being played, I actually never watched,” admitted Hunter. “I’d always be playing on a back field.”

Hunter began working on his craft in football as a sixth grader, when his parents let him first give it a try. Eventually, he grew into a two-sport athlete in high school like his father, also playing baseball.

Tim hired his college baseball coach, John Daurity, to the same position at Socastee High School. Daurity ended up coaching Hunter, a standout center fielder for the Braves. While a passion for the game of baseball was evident, Hunter said his mindset changed around the time of his sophomore year on the gridiron.

“Liberty offered me a 50-percent scholarship for baseball,” he said. “But I let it be known early that I was set on football. I didn’t dream of playing professional baseball…I dreamed of playing football at Clemson.”

To make that dream a reality, Hunter let his versatility on the field do the talking. As a freshman, he served as Socastee High School’s punter. The next year, he played running back, receiver and safety. Then, after his older brother Jordan graduated, he was thrust into the quarterback position as a junior and senior.

There was only one problem, though. Hunter knew he would not be able to play quarterback at the next level.

“I wasn’t very good at throwing the ball…we ran the triple option at Socastee,” he laughed. “Coach (Danny) Pearman got me to camp at Clemson after my sophomore and junior years, and that’s when coach (Jeff) Scott offered me as a preferred walk-on at receiver.”

Renfrow first came to Clemson in the summer of 2014, working closely alongside future Tampa Bay Buccaneers wideout and bearer of the #13 jersey, Adam Humphries.

“He taught me a lot, and that was huge for my confidence,” stated Renfrow. “I was a little bit star struck at first, because I grew up a Clemson fan. But the guys were genuine…guys like Charone Peake were really down to earth.”

He said the redshirt season benefitted him immensely, citing the ability to learn from players such as Humphries, Peake, Mike Williams and Artavis Scott.

“The best thing I ever did was redshirt, because I played against the No. 1 defense in the nation on the scout team,” he said. “It helped me out this past year, knowing I wouldn’t go against anyone better than what I’d seen in practice.”

Renfrow assumed the #13 jersey upon Humphries’ graduation, and surely made his predecessor proud over the course of his redshirt freshman season.

His first impact came on the road at Louisville, as the Tigers went into hostile territory in a nationally-televised Thursday night contest against the Cardinals. He was inserted into the game early and soon after found himself wide open down the middle of the field, easily hauling in a 32-yard touchdown grab from Deshaun Watson.

Renfrow cited the rain-soaked thriller against No. 6 Notre Dame that ensued as the first moment he truly believed he could make an impact at Clemson.

“I scored against Louisville, but I was wide open,” he said. “When I caught a corner route on our sideline in front of the student section in the rain, it made me feel like I could play.”

He played 32 snaps in the 24-22 win over the Fighting Irish, and two games later, he earned his first starting assignment against Boston College. He would not relinquish his spot the remainder of the 2015 campaign.

Renfrow’s breakout performance came in a road win against NC State, a 56-41 Tiger victory. He had four receptions for a season-high 93 yards, with a long touchdown grab early in the contest. That would prove to be his final touchdown of the regular season, but Renfrow was just getting started.

With Clemson holding on to a six-point lead in the third quarter against Oklahoma in the Orange Bowl, Watson called Renfrow’s number. He stepped into a throw that found its way to Renfrow in single coverage, and Renfrow turned up field for a 35-yard touchdown as the Tigers routed the Sooners 37-17 to advance to the College Football Playoff National Championship Game, where his success has already been documented.

But there was a time Renfrow did not expect to hear his number called again.

“After the game at Syracuse, I was very down,” he admitted. “I played only 18 snaps. I fumbled and missed a key block. Coach Swinney chewed me out and benched me. I didn’t think I’d play again after that.

“But as I look back, I think we needed that Syracuse scare. We were a lot more focused and knew anyone could beat us. I think that will help us this season.”

Renfrow’s success has brought a few more “good luck” wishes and “great job” comments from classmates on campus, but it has not changed him personally. He is the same player who worked his way into a scholarship after starting his career as a walk-on.

He is the same player who is just as easy to find attending Tiger baseball games, where he cheers on close friend Robert Jolly and Clemson while fondly remembering his glory days on the diamond.

Renfrow began his undergraduate career as an engineering major, but has since switched to economics with all that playing high-level college football entails. He has put thought into being a graduate assistant one day. That is, of course, if professional football does not work out.

His father beams with pride when recalling his son’s accomplishments of this past season, and is not taking anything for granted on this ride.

“Hunter has been blessed to play at this level,” explained the elder Renfrow. “As a parent, it’s fun to see your kids have success. But if the team wasn’t as successful, it would have been different. That’s why we love what Clemson and coach Swinney stand for. It’s a special time to be a Tiger.”

And it is a special time to be Hunter Renfrow, now the envy of Clemson fans and aspiring collegiate wide receivers across the nation.