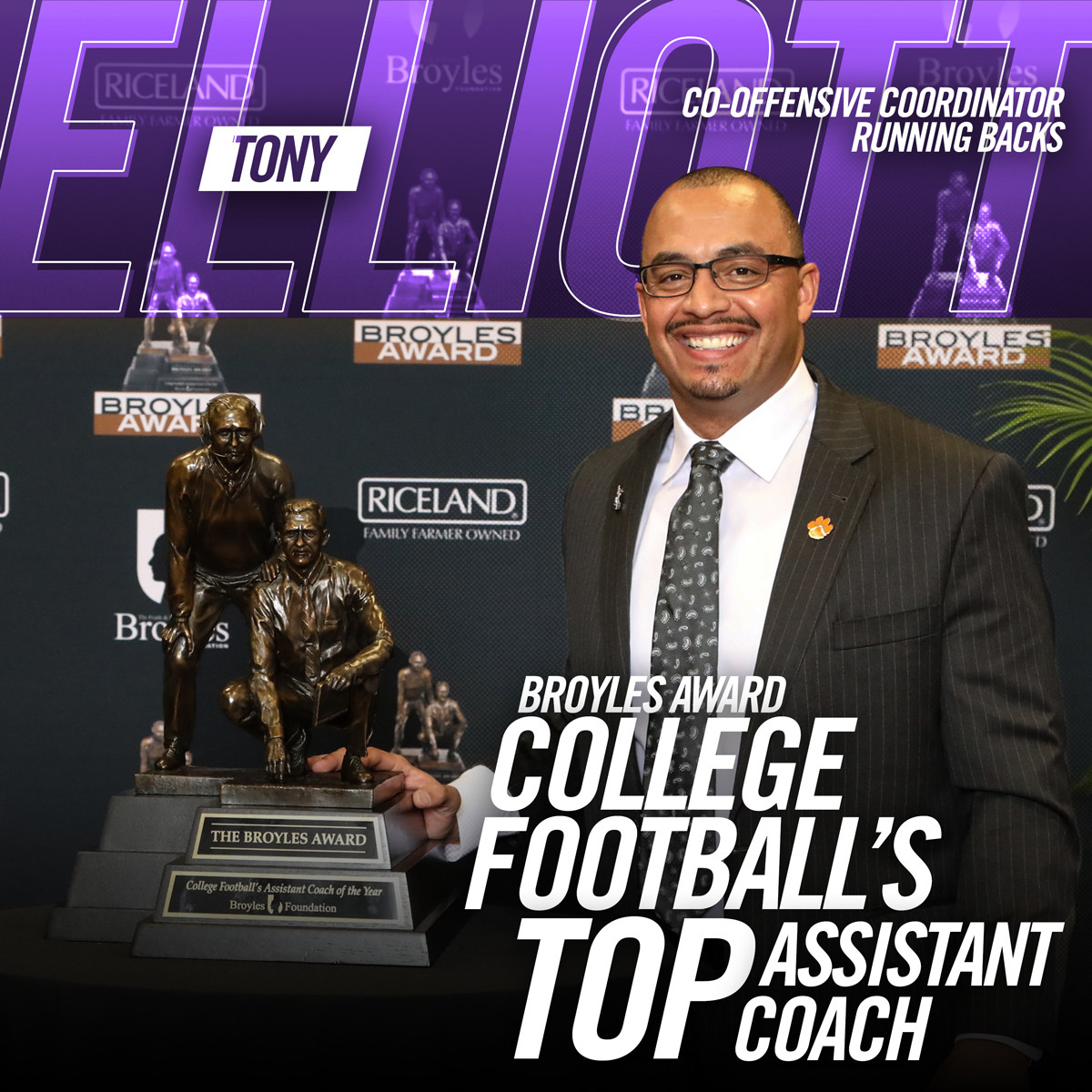 Clemson, S.C.—Clemson Co-Offensive Coordinator and running backs coach Tony Elliott received the Frank Broyles Award on Tuesday as the National Assistant Coach of the Year on college football. The presentation was made at a luncheon in Little Rock, Arkansas by the Frank & Barbara Broyles Foundation.

With Elliott’s selection, Clemson became the first school two have winners of the Broyles Award in consecutive years in the 22-year history of the award. Clemson Defensive Coordinator Brent Venables won the award in 2016, and he was on hand Tuesday to present Elliott with the award.

Other finalists for the 2017 award were Kevin Steele of Auburn, Bill Bedenbaugh of Oklahoma, Troy Walters of Central Florida and Jim Leonhard of Wisconsin.

“I am so happy for Tony Elliott,’ said Clemson Head Coach Dabo Swinney. “To have back-to-back winners of the Broyles Award speaks to the success of our program. A lot of credit for this goes to our players and staff.

“This is special for me personally because I coached Tony my first year in 2003 when I was receivers coach. I have had a front row seat to his career as a player and a coach and I am so proud to have him recognized as the top assistant coach in the nation.”

Elliott has helped Clemson to a 12-1 record so far this year and a No. 1 ranking according to Associated Press, the Amway Coaches Poll and the College Football Playoff Poll.      The Tigers have a school record six wins over Top 25 teams and have a 9-0 record against bowl teams in 2017.

Since Elliott and Jeff Scott have been Co-Coordinators of the Clemson offense, the Tigers have a 41-3 record, including a 16-1 record against Top 25 opponents.

Clemson’s offense lost players who accounted for 77 percent of the total offense in 2016, 127th out of 130 FBS teams.   But the Tigers have exceeded expectations on offense by ranking fourth in the nation in rushing touchdowns (40), sixth in completion percentage (.670), 10th in total touchdowns (62) and 10th in third down conversion percentage (.476).

Clemson averages 35.4 points per game, 21st in the nation and 449 yards of total offense per game. The Tigers average 205 yards a game rushing and 244 passing and are on pace to be just the third team in Clemson history to average at least 200 rushing and 200 passing in the same season.