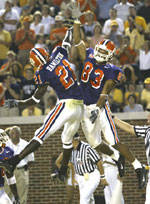 Clemson graduate student Tony Elliott has been named to the CoSida Academic District III team. Elliott is now a candidate for Academic All-America honors. That team will be announced on December 1.

Elliott is the first Clemson player named to the team since Chad Carson and Kyle Young both made the team from 1999-01. Both made first-team Academic All-American that year. Elliott received his undergraduate degree in engineering last May. The Charleston, SC native earned a 3.55 GPA for his career. He is now in graduate school taking courses in international trade.

So far this year Elliott has 20 receptions for 242 yards and a touchdown. He is a major reason Clemson has averaged 279.5 yards per game, a school record pace. He is fourth among Clemson’s wide receivers in receptions and yardage this season. He has had at least one reception in seven of the 10 games this year, including a season high five catches for 31 yards and a touchdown at Georgia Tech.