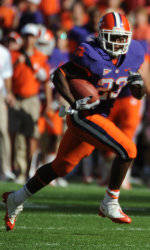 CLEMSON, S.C. (AP) – Andre Ellington rushed for a career high 166 yards and two long touchdowns as Clemson ended a four-game losing streak to Georgia Tech in a 27-13 win on Saturday.

But Ellington struck for scoring runs of 55 and 42 yards in the opening half and added a 10-yard TD catch in the third quarter – the sophomore’s first of his career – to end Georgia Tech’s streak.

Clemson’s defense did its share in shutting down the Yellow Jackets’ ACC-leading rushing attack to 242 yards, nearly 100 fewer than their average. Georgia Tech’s point total was its lowest of the season.

Georgia Tech quarterback Joshua Nesbitt came in needing 44 yards to set the ACC’s mark for rushing yards gained by a quarterback. But he was continually harassed by Clemson’s defenders and ended with 2 yards on 15 carries.

Clemson has had its share of troubles with Georgia Tech the past few meetings since its last series win in 2006. That night, the Tigers’ “Thunder and Lightning” duo of James Davis and C.J. Spiller combined for 332 yards and four touchdowns in a 31-7 rout.

But the Yellow Jackets have had their way over Clemson ever since – albeit by the slimmest of margins.

Their four straight wins have been by a combined 15 points, including the five-point victory to take the ACC championship.

Ellington and the Tigers, with a little help from Georgia Tech, made sure this one couldn’t come down to the end.

Ellington was at it again in the second quarter with a 42-yard scoring run. He even added a little Spiller flair at the end, cutting back on Georgia Tech’s Jerrard Tarrant for the score.

The Yellow Jackets punted three times and gave up the ball on downs their first four possessions.

Georgia Tech had two drives of 66 yards or more at the end of the first half and start of the second, but came away with two field goals.

Ellington all but ended thoughts of a rally with his 10-yard touchdown catch from Kyle Parker for a 24-6 lead.

The closest Georgia Tech came after that was 24-13 on Anthony Allen’s 9-yard scoring pass from Nesbitt.

Clemson took a page from Georgia Tech’s playbook with a 15-play drive that lasted for nearly 8 minutes and ended with a clinching field goal.