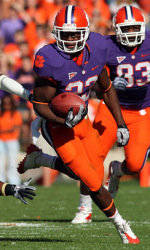 CLEMSON, SC – Clemson running back Andre Ellington has been named to the preseason Watch List for the 2011 Paul Hornung Award. The honor, named after the 1956 Notre Dame Heisman Award winner, is presented each year to the top all-purpose player in college football.

Ellington showed his all-around abilities last year when he rushed for 686 yards in nine games. He scored 12 touchdowns to lead the Tigers even though he missed all of four games and most of two others due to injury.

The native of Moncks Corner, SC had 10 touchdowns rushing, one receiving and one on a kickoff return in 2010. He had 12 catches for 109 yards and seven kickoff returns for 238 yards, a 34-yard average. He had an 87-yard kickoff return for a touchdown in Clemson’s win over Maryland and had 166 yards rushing in the victory over Georgia Tech. For his career, Ellington has rushed for a Clemson record 6.33 yards per attempt, and has 1,177 net yards.

Ellington is also on the preseason Watch List for the Maxwell Award and the Doak Walker Award, and he was named preseason first-team All-ACC by the media covering the Atlantic Coast Conference kickoff last month.

Ellington is one of five players from the ACC on the list. The others are Taylor Gentry of NC State, Jayron Hosley of Virginia Tech, Greg Reid of Florida State and David Wilson of Virginia Tech.