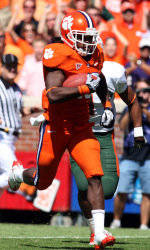 CLEMSON, S.C. (AP) – Andre Ellington had an 87-yard kickoff return score and added a rushing touchdown as Clemson broke a three-game losing streak and avoided its usual Maryland meltdown in a 31-7 victory Saturday.

The victory for the Tigers (3-3, 1-2 Atlantic Coast Conference) came when former Clemson star C.J. Spiller had his No. 28 retired. And Ellington did his best to emulate the excitement Spiller brought Death Valley the last four years.

Ellington broke through the Terps early in the second quarter for Clemson’s first kickoff return score since Spiller had one against South Carolina last November.

Ellington also had a 1-yard touchdown in the third quarter.

Maryland (4-2, 1-1) had won three of its past four against Clemson, but could do little against the Tigers defense. The Terps’ only TD came on a halfback pass from Da’Rel Scott to quarterback Danny O’Brien.

Clemson defensive end Da’Quan Bowers had three sacks, giving him nine on the season. Cornerback Xavier Brewer had a 61-yard interception return touchdown in the final quarter to wrap things up.

Maryland’s last, best chance at a rally came in the third quarter, driving to the Clemson 29 down 24-7. However, the Terps were flagged for an illegal shift and the Tigers took over on downs.

Clemson’s opponents had been five-of-five on fourth-down conversions this season until then.

The Tigers were desperate to break out of an offensive slump – they managed just 44 points the past 10 quarters – and Maryland seemed the wrong opponent to do it against.

The Terps had Clemson’s number the past few meetings, including the past two at Death Valley where they left with stunning victories against the favored Tigers.

Perhaps it was Spiller’s presence that broke the jinx.

Spiller, the Buffalo Bills rookie running back, strode with the players in their “Tiger Walk,” and ran down Death Valley’s famed hill into Memorial Stadium with his former teammates.

At halftime, last year’s ACC player of the year was honored with his framed No. 28 jersey as the 71,000 fans attending applauded and chanted his name.

Ellington, who Spiller has long called his “little brother,” sure looked a lot like the former star in breaking away for the kickoff return touchdown. Ellington picked his way through the middle of the pack before outrunning two Maryland defenders to the end zone.

Maryland had been one of the ACC’s early surprises. Yet, its victories have come against Navy, Morgan State, Florida International and Duke. This was supposed to show the Terps’ viability in the league.

But Maryland’s playmakers were largely quiet. Runners Scott and Davin Meggett combined for 47 yards. Receiver Torrey Smith was held to less than his 81-yard receiving average with four catches for 55 yards.