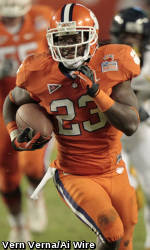 CLEMSON, SC – Clemson running back Andre Ellington had minor ankle surgery on Thursday. The second-team All-ACC running back will not play in Clemson’s spring game on Saturday, but he should be 100 percent for summer workouts.

The surgery, which had been planned for some time, was performed to clean up scar tissue on an ankle that was the result of an injury suffered during the 2011 season.

The senior had 1178 yards last year to lead the Tigers in rushing. He has 2323 yards in his career and a 5.68 average per carry, the seventh best average in ACC history among players with at least 2000 yards rushing.