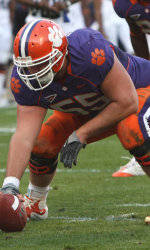 Ellington, a junior from Moncks Corner, SC has 1,177 yards in 186 carries for his career, a 6.33 average. That 6.33 average is the best in Clemson history among players with at least 1000 yards rushing. He had 686 yards and scored 12 touchdowns in nine games last year. He missed four games completely and most of two others due to injury in 2010.

Ellington’s top game last year came against Georgia Tech when he had a career high 166 yards rushing and had 257 all-purpose yards. He was named ACC Offensive Back of the Week for that performance.

Ellington is one of five ACC players on the Doak Walker Award Watch List. He is joined by Montel Harris of Boston College, Davin Meggett of Maryland, Lamar Miller of Miami (FL) and David Wilson of Virginia Tech.

Freeman has started each of the last 22 games and has played 26 in a row entering this year. He had 58 knockdown blocks last year, second on the team, when he started all 13 games. He allowed just two sacks all year and had an 80.6 average film grade from the Clemson coaching staff. He also made first-team Academic All-ACC last year.

In 2009, he started nine of the 14 games and was the first freshman to serve as Clemson’s starting center over the course of the season since 1943. He was a first-team Freshman All-American by Collegefootballnews.com when he helped the Tigers to the ACC Atlantic Division Championship.