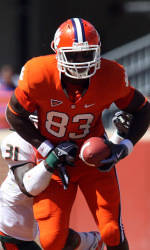 CLEMSON, SC – Clemson juniors Andre Ellington and Dwayne Allen have both been named to preseason watch lists for prominent college football awards for the 2011 season. Ellington, a running back, has been named a preseason watch list candidate for the Maxwell Award, the honor given to the top player in college football by the Maxwell Award Committee, while Allen has been named a candidate for the John Mackey Award, which is given to the top tight end in the nation.

Ellington had 686 yards rushing in just nine games last year. He averaged 5.8 yards per rush and scored 12 total touchdowns last year, 10 rushing, one receiving and one on a kickoff return. He had four games of at least 100 yards rushing and was 10th in the nation in scoring through the first seven games of the year. He had 257 all-purpose yards in Clemson’s win over Georgia Tech. His season was cut short by an injury suffered against Boston College.

Allen had 33 catches for 373 yards and a touchdown in 2010. He was third on the team in receptions and his total was the most ever by a Clemson sophomore tight end. Allen, who was second-team All-ACC last year, had five catches for 66 yards against Auburn and a career-high seven receptions for 55 yards at North Carolina.

Allen is one of five ACC players on the Mackey Watch List. The others are George Bryan of NC State, Cooper Helfet of Duke, Chris Pantale of Boston College and Colter Phillips of Virginia.