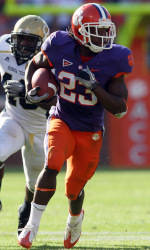 LOUISVILLE, KY – After recording 257 all-purpose yards, Clemson’s Andre Ellington has been added to the weekly “Paul Hornung’s Most Versatile Performances of the Week.” The addition was announced Wednesday by Paul Hornung and the Louisville Sports Commission.

In addition to 166 rushing yards, Ellington had two catches for 12 yards and three kick returns for 79 yards.

Tickets are now available at a discount for Clemson’s home game against N.C. State on November 6. Adult tickets are $24 each and youth tickets (18 and under) are $10 each for the game against the Wolfpack. Tickets may be purchased online at ClemsonTigers.com or by phone at 1-800-CLEMSON.