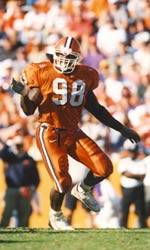 Clemson, SC – Clemson starting defensive tackle Nick Eason will undergo tests this weekend to determine if he has any heart abnormalities. Eason reported he was experiencing an irregular heartbeat to Clemson’s medical staff at the end of the second practice on Thursday night.

Eason missed both practices on Friday to begin tests, and they will continue over the weekend. The tests that were run on Friday were negative. “Nick is certainly one of the leaders of our entire team and we will miss that leadership the next few practices,” said Clemson Head Coach Tommy Bowden. “The initial findings have been good, but we want to take every precaution.”

Eason has had to battle injury problems since December of 2000 when he suffered a torn Achilles tendon during practice for the Gator Bowl game with Virginia Tech. He did not miss a game during the 2001 season, but was limited by a sprained ankle much of the season. He played just five snaps against Virginia and at NC State. For his career he has played 35 games, 23 as a starter. He has 91 career tackles, including 21 tackles for loss and eight sacks.

Eason already has his undergraduate degree in sociology and is currently working on his master’s degree in human resource development. He was named to the American Football Coaches Association Goodworks team, one of just 11 players from across the nation selected. He has been named a Top Six Award recipient by the ACC for his community service activities, the only four-time recipient of that award from Clemson.