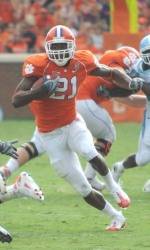 Clemson, SC – Clemson receiver Xavier Dye was one of just 11 FBS players named to the Allstate AFCA Good Works Team announced on Tuesday. The select group of student-athletes was selected for their outstanding work in community service.

Dye is the third Clemson player named to the team since it was formed by the American Football Coaches Association in 1992. The previous Clemson selections were Robert Carswell in 1999 and Nick Eason in 2000.

In order to meet the criteria set forth by Allstate and AFCA, each player must be actively involved and committed to working with a charitable organization, service group or community service while maintaining good academic standing. Candidates must also display sincere concern and reliability, while also having made a favorable impression on the organizations with which they are involved. Neither athletic ability nor on-the-field achievements are among the selection criteria.

Dye, a junior from Greenwood, SC and a graduate of Byrnes High School near Spartanburg, has been active in community service activities since he came to Clemson in January of 2007.

The following is a list of community service activities Dye has been involved with since he came to Clemson.

 Speak Up for a Child Gala  Boy Scout Day at Clemson  Men’s Clinics in Mauldin, Walhalla and Greenville – church affiliated  Mission trip to New Orleans, La with FCA  Tutors a middle school student in Clemson once a week  Sports Day in Greenwood – assisted a youth group  Speaker at various elementary schools in the upstate delivering the Be a T.I.G.E.R! character education program  Football camp in Liberty, SC for underprivileged children  Regular visits to local children’s hospitals  Relay for Life  Reads to local elementary school children  Makes regular visits to a patient at St. Francis in Greenville who is suffering from a brain tumor  Visits a children’s home in Central, SC

The following players have been selected to the 2009 Allstate AFCA Good Works Teams®: