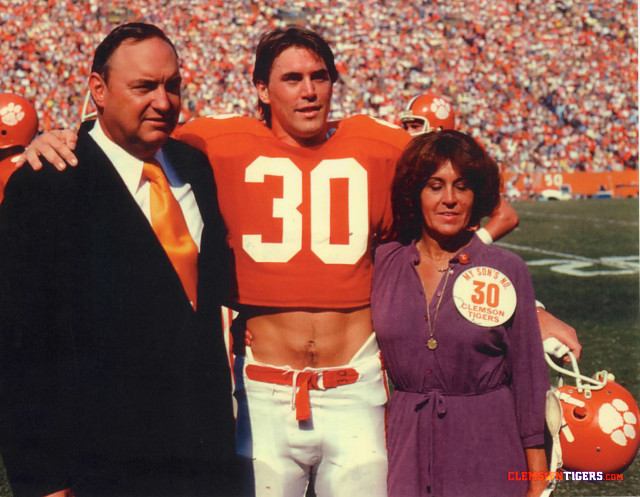 Clemson, S.C.—Former Clemson wide receiver Dwight Clark has been named one of the 2018 inductees for the South Carolina Football Hall of Fame. The enshrinement will take place in Greenville on April 19, 2018.

Clark played for Clemson between 1975-78 and was part of a class that brought Clemson to its first bowl game in 18 years in 1977. The following year, Clark’s senior year, the Tigers finished 11-1 and had a No. 6 final national ranking.

Clark had 33 receptions for 571 yards in his Clemson career as one of the receivers on an offense run by quarterback Steve Fuller. Clark’s 17.3 yards per reception still ranks seventh best in Clemson history.

The North Carolinian was a 10th round draft pick of the San Francisco 49ers in April of 1979 by the San Francisco 49ers. Clark joined forces with Joe Montana and others to help the 49ers to a pair of Super Bowl Championships in the 1980s. Clark finished his NFL career with 506 receptions for 6750 yards and 48 touchdowns. His No. 87 was retired by the 49ers.

During his retirement from the game, he has been involved in NFL administration and was General Manager of the 49ers and the Cleveland Browns.

The 2017 Blanchard-Rogers Trophy is presented by the Hall each year to the top college football player from the state of South Carolina. This year’s recipient is Oklahoma State quarterback Mason Rudolph, a native of Rock Hill. He also will be honored on April 19.