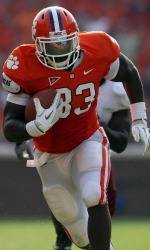 BETHPAGE, NY – The 2011 John Mackey Award midseason watch list has been released by the Nassau County Sports Commission. Given annually to the best collegiate tight end, the award recipient is selected by vote of the John Mackey Award Selection Committee and the 2011 John Mackey winner will be presented live at the Home Depot ESPN College Football Awards Red Carpet Show on December 8, 2011 on ESPNU. Other key Mackey Award dates include the announcement of the 2011 Mackey semi-finalists on November 14, 2011 and the announcement of the 2011 Mackey finalists on November 21, 2011. All future announcements can be found at www.johnmackeyaward.org.

The John Mackey Award midseason watch list is an update from the preseason watch list. This list is meant to draw attention to tight ends in contention for the annual award based on their performance in the first half of the active season.