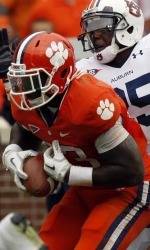 BETHPAGE, NY – Dwayne Allen of Clemson was named John Mackey Tight End of the Week by the Nassau County Sports Commission. The ACC Atlantic Division junior recorded seven receptions for 80 yards and a receiving touchdown. Allen’s touchdown came when the team was down 21-7 in the second quarter igniting a 31-3 run as Clemson beat Auburn 38-24 to snap Auburn’s 17 game win streak. Other candidates considered for this week’s Mackey Tight End of the Week include Cooper Helfet of Duke and Orson Charles of Georgia.

The 2011 recipient of “The Mackey” will be announced at the Home Depot ESPNU College Football Awards Red Carpet Show December 8, 2011 on ESPNU. Please visit www.johnmackeyaward.org for all Mackey Award related information including the John Mackey Selection Committee, the selection process and award criteria, information on all past award recipients and a high resolution image of the award trophy available for download.

The John Mackey Award is a member of the National College Football Awards Association (NCFAA). The NCFAA was founded in 1997 as a coalition of the major collegiate football awards to protect, preserve and enhance the integrity, influence and prestige of the game’s predominant awards. The NCFAA encourages professionalism and the highest standards for the administration of its member awards and the selection of their candidates and recipients. For more information, visit the association’s official website, www.ncfaa.org.