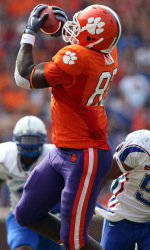 CLEMSON, SC – It’s good to have friends. It is even better to have ones you can trust.

When he was on a local radio show in the Upstate last December, Clemson tight end Dwayne Allen made a special request on air. Allen, who is very up to speed on Clemson’s rich football tradition and appreciative of those who came before him, spoke about some of the former players he had the privilege of knowing. At that point, however, there was one guy he had not had the pleasure of meeting.

When it comes to tight ends at Clemson, Cunningham set the standard, both on and off the field. Besides being a two-time All-American at Clemson, he helped the Steelers win two Super Bowls in the late 1970s, plus he and his family are known for being some of the best educators in the state of South Carolina.

“That’s the one guy, if I could choose who to meet, that’s the guy I want to meet,” Allen said.

Allen got his wish. After learning of his request through a mutual friend, the two-time Super Bowl Champion agreed to meet Allen after a practice one night. Clemson Head Coach Dabo Swinney invited Cunningham to stay for the team meal afterward, which allowed him and Allen to talk more. What derived from that conversation is a friendship that Allen plans to lean on for the rest of his life.

“He and I are so much alike,” Allen said recently. “In talking with him, and getting to know each other, we really realized how much alike we are. His past experiences and then what I have experienced, we are a lot alike.”

The two are even more alike when it comes to career paths. Like Cunningham, Allen wants to give back to the community. He wants to guide young people in the hopes they will make better decisions in life as a way of saying “thank you” to those who did the same for him.

After his playing days were through in Pittsburgh, Cunningham came back to the Clemson area where he coached high school football for a little while, and is now a Career Guidance Counselor at West-Oak High School in Westminster.

Allen hopes to do the same kinds of things when his football career is over.

“He gave me a little insight and a little bit of wisdom,” Allen said.

Cunningham also did the same when it came to Allen’s football career. When Swinney hired Chad Morris as his new offensive coordinator last January and said the offense was going back to the spread, Allen became concerned as to what it meant for his future at Clemson.

At one point, though he didn’t give it too much thought, he contemplated leaving school and throwing his name into the NFL Draft. But, before he did anything, he called on several people to get advice – his family, high school coaches, his position coach, Coach Swinney and of course, Cunningham.

Cunningham told Allen to stay in school, to stay at Clemson and more importantly, “just play your game.”

“I’m not a dummy,” Allen said. “So I was not going to take that kind of step if I wasn’t ready for it, and I definitely wasn’t ready for it after last season.” After being reassured by Swinney he would be utilized more in the new offense, Allen went to work. Knowing he needed to be quicker and have more endurance, he got his weight down to 250 pounds and will head into fall camp next month in the best shape of his playing career.

“Coming into the spring, I was a little skeptical about how I was going to be utilized, so I wanted to be as physically capable as possible,” he said. “I wanted to be in shape and do whatever I possibly could to get there. Luckily, I did that.

“I’m being used in a lot of different ways in this offense. I’m doing things that I have not done before. I’m a little bit out of my comfort zone, but I’m getting used to it.”

Allen, who has caught 43 passes in his career for 1,123 yards, says Morris’ offense is a lot of fun and puts the ball in his hands more than it did in years past. It also frees him up a lot. He is not attached to the line as much. He is split out more. He is in the backfield, and when he comes from the backfield in passing concepts, he has more space and more wiggle room to shake defenders.

“You have to have a guy that warrants being on the field, and I think Dwayne Allen is a guy that is really going to make big strides in this offense,” Swinney said. “He did a lot of good things last year, but I think he got worn down. I really do. But, I think we are going to have more help for him this year. Plus he is smarter, more focused and mentally tougher.”

And he has a new friend to help make sure he is.