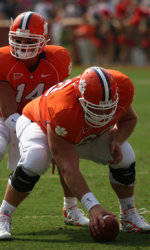 Fry was selected by strength coach Joey Batson, who said, “Dustin is considered to be one of the top centers in the country. For a big man, Dustin displays tremendous power and quickness. He has won several off season strength and conditioning awards at Clemson. He is a great leader in the weight room as well as on the field.” Fry started all 13 games this season at center, earning Second-Team All-ACC honors.

Waters was nominated by strength coach David Abernethy, who said, “Anthony has been one of the greatest leaders to come through Clemson in many years. Anthony has volunteered many hours to the community and FCA. His work habits enabled him to enter the NFL draft as a top junior linebacker; however he decided to return for his senior year and achieve the ultimate goal of obtaining a Clemson degree.”

Waters was a Preseason All-American for 2006 as well as the ACC’s leading returning tackler before sustaining a season ending knee injury in the first game of the season against Florida Atlantic. Waters was a preseason All-ACC and All-American selection prior to his injury. He was also named to the preseason watch list for the Bednarik and the Bronko Nagurski awards.

This year, the NSCA awarded 239 collegiate athletes from 165 schools with this respected award. The NSCA All-American Athlete of the Year Award program is in its 28th year.