Drew Swinney | Soaking It All In

Drew Swinney is no stranger to Clemson football. Born in Tuscaloosa, Ala., he moved to Clemson when he was three and has spent nearly his entire life around the Tiger program.

It was no surprise when he decided to attend Clemson and walk on to the football team. Despite his father, Dabo Swinney, being head coach of the Tigers, Drew recounted there being no pressure from his immediate family to attend Clemson.

“I wanted to come to Clemson. Growing up around the team, running around at practices as a kid and seeing the culture here really influenced me. Clemson is such a family environment and I remember talking to my brothers and hoping for an opportunity to run down the Hill one day as a member of the team.”

That dream became a reality when he decided to walk on in 2018, joining his father and older brother while wearing #81, Dabo’s high school number.

During his time at Clemson, Swinney has been blessed by the opportunity to play four seasons with his older brother, Will, which he has described as a unique and fulfilling experience. Drew did not hesitate to mention his older brother as one of his role models. Other role models include his father, Hunter Renfrow and Wide Receivers Coach Tyler Grisham.

“Will has been an awesome leader to me. Being able to play alongside him and embrace a hard-working mentality has been amazing. It’s also been incredible to see my dad in this environment and as a coach. He’s so passionate and has so much joy for what he does. The way he’s been able to impact so many young people and inspire them has been really cool to see. He’s doing what he was made to do.”

As a Tiger, Will became one of the most renowned holders in college football, holding the ball for five seasons and 558 points. Drew now has the chance to step into his brother’s shoes and carry on his legacy as the starting holder in 2022. Drew is enthusiastic and ready to make the best of it.

“At Clemson, Will was the holder for the past five years, and I’ve been able to watch him perfect the craft and learn from him, and I hope to translate that into this year. It’s a very detailed position and requires a lot of skill, and I’m excited for what this season has to offer.”

Will graduated in May 2021, and Drew hopes to mirror his older brother and fill the leadership role for his younger brother, Clay, who is a first-year freshman on the Tiger team.

“I’ve never been at the same school with Clay. When I was leaving high school, he was coming in, so we’ve never been able to play on the same team. Him being here is really cool, and I’m excited to pass on the legacy and get him started on the right foot. I’ve gotten to play with both of my brothers while playing for my dad at this level, and I don’t know if anyone else can say that.”

Familiar to Swinney is the Clemson culture of celebrating every victory. His father’s locker room dances have been seen nationwide, and the slogan, “We win, we dance,” has become a way to celebrate hard-fought victories.

Although his father is usually the one with the attention of the cameras during these dance-offs, Swinney is confident he has his father beat in the dance department.

“Will dances like my dad…Clay and I are the ones with rhythm. We probably got it from my mom, because she can dance too. The best dancer on the team is E.J. Williams, but Hamp Greene is definitely a sleeper. Not a lot of people know, but Hamp can really break it down.”

Of many fond memories at Clemson, Swinney recalled winning the 2018 national title as one of his most memorable moments. The Tigers completed their perfect 15-0 season with a convincing victory over Alabama during his first year on the team.

Swinney jokingly remarked that he never thought he would lose after the Tigers recorded 14 more consecutive wins during his second year, totaling a 29-0 record before losing to LSU at the end of the 2019 season. He stated that the 2022 team has a similar vibe to that star-studded 2018 team, and he has expressed high hopes for the season.

Crediting P.A.W. Journey as a massive influence during his time at Clemson, Swinney was voted an ambassador in 2020 and has served in the role since. While being involved in P.A.W. Journey is available to the whole team, ambassadors help lead team initiatives and direct the team in a student leadership role.

Through P.A.W. Journey, Swinney has participated in several internships, including this past spring with Elliott Realty in Myrtle Beach, S.C. Noting similarities between the way the company was run and the way the football team is run, Swinney believes he could have a smooth transition into the post-graduate work world and be successful due to what he has learned during his time in Tigertown.

Swinney graduated from Clemson in May with a degree in marketing and is pursuing his MBA, which he will finish next summer. Mentioning a possible career in the business world, Swinney said he could also see himself in a coaching position.

Although unsure of what his future holds, he is not worried and is concentrating on having a great final season…along with one other thing. Swinney recently proposed to his longtime girlfriend, Mary Crosby Spiers, the younger sister of a former Clemson punter, Will, and football staffer, Ashley, as well as daughter of Bill, another Tiger staffer and former MLB player. They plan to get married in March on a beach in Florida.

As Swinney’s final season is underway, he is focused on making the most of it and cherishing the wins alongside his teammates.

“The first time I ran down the Hill was surreal and I had goosebumps. I know the last time will probably be even more special, so I’m trying to soak it all in during my final season.” 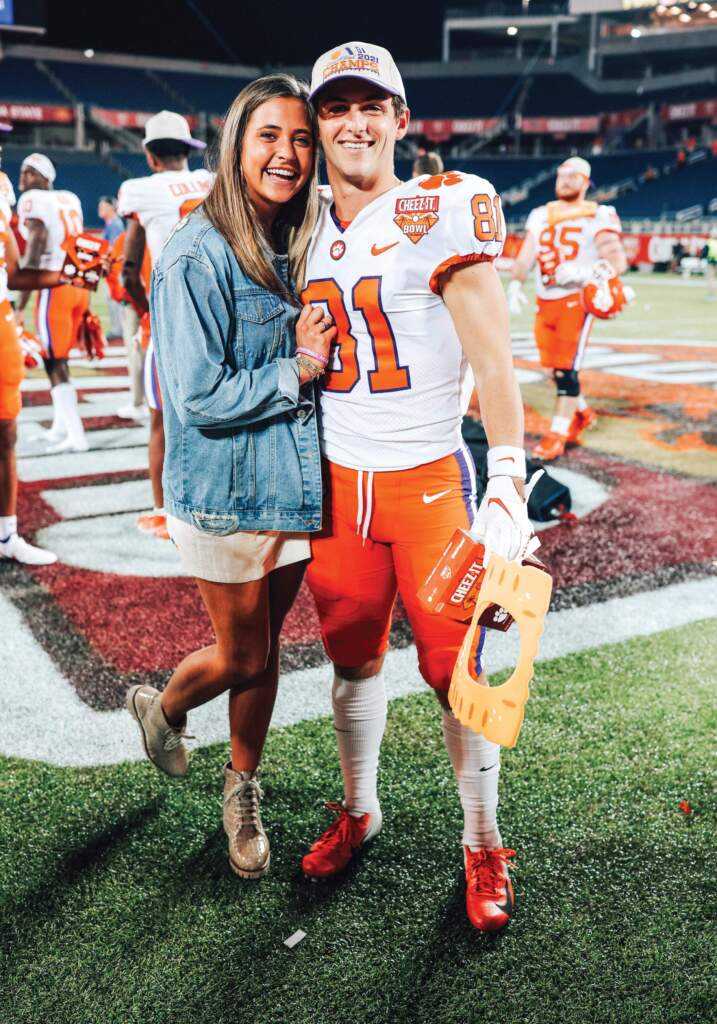