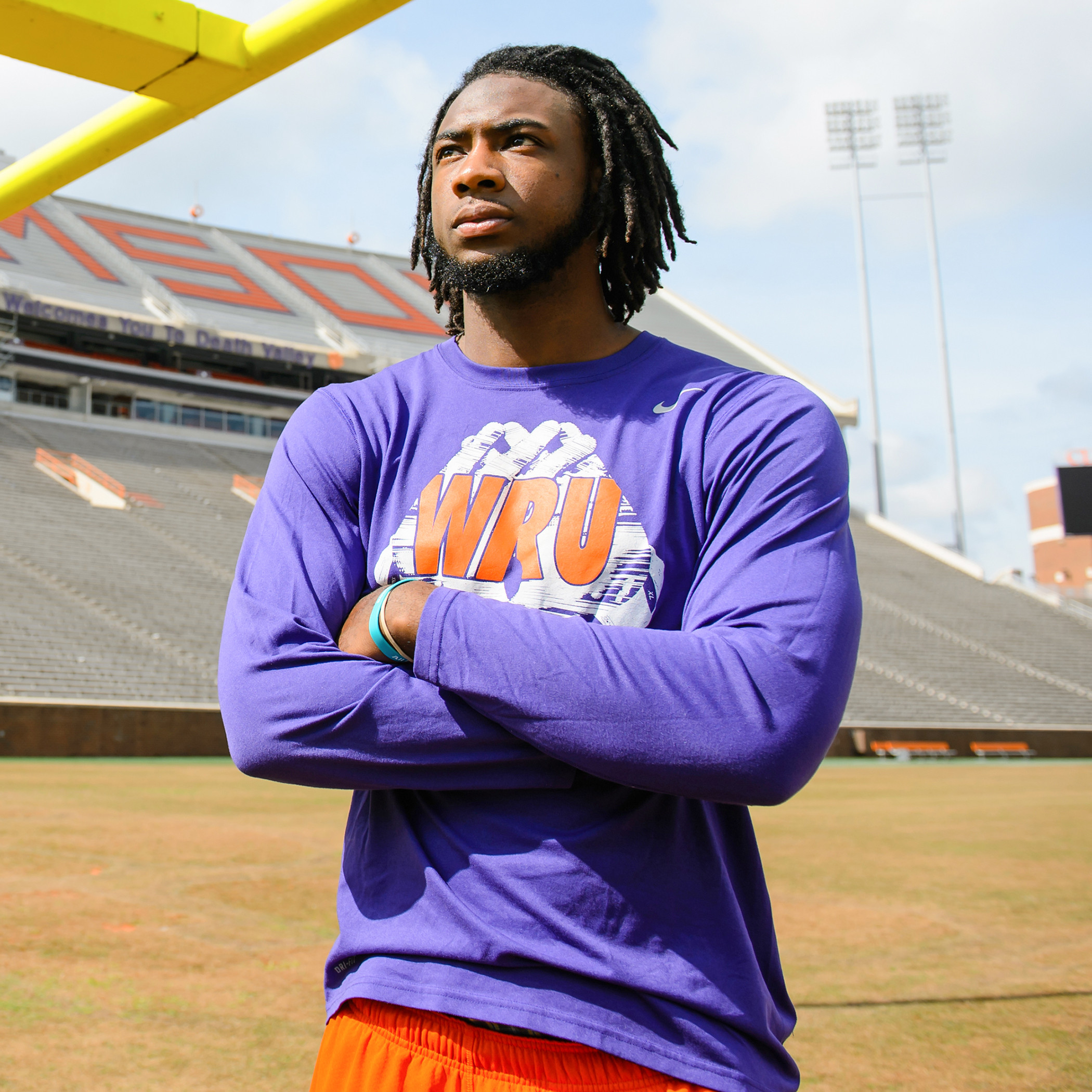 Mike Williams originally wanted to play college basketball. As someone who grew up playing whatever sport was in season, the 6’3” wide receiver had high aspirations on the hardwood, but as he began to be recruited by football programs of such a caliber as Clemson, his dream shifted.

Fast forward a few years, and Williams chose to accept his offer from Clemson over schools like Alabama, Georgia, Mississippi and Notre Dame among others. It was the atmosphere of Tigertown that sold him, and he has no regrets with his decision.

“I felt a different vibe,” said Williams of why he picked Clemson. “I visited a few schools, but I felt like Clemson was different. It felt like a family away from my family back home. I felt comfortable here, and my family was comfortable with me coming here, so all of that influenced my decision.”

During his freshman year as part of a receiving corps that included the likes of Sammy Watkins, Williams totaled 20 receptions for 316 yards and three touchdowns over 13 games and three starts. Learning from and having Watkins as a role model was an invaluable experience for Williams, and he wants to be that kind of positive influence on younger wideouts as well.

“Player-wise, I was influenced by guys like Sammy Watkins,” said #7. “He did what I want to do. I try to be like him so I can get to the same point.”

Also helping him reach his goal of following in Watkins’ footsteps to the NFL are the coaches, and Williams has tried to absorb as much as possible from them during his time as a Tiger.

After Watkins departed for the NFL, Williams became a primary receiving target for the Tigers. He was named Second-Team All-ACC by the media and Third-Team All-ACC by the coaches during his sophomore campaign in 2014, tallying 57 receptions for a team-high 1,030 yards and six touchdowns. The 2014 season also saw Williams finish first in school history in receiving yards by a sophomore and seventh in the nation in yards per catch (18.1).

Naturally, Williams was poised to be dominant during his third-year campaign. But his 2015 final stat line included just one game, two receptions and one touchdown after a collision with the east endzone goalpost at Memorial Stadium on the first drive of the season that left him in a neck brace and on the sidelines for the rest of the year. It was a defining moment in the Vance, S.C., native’s football career.

“My injury last year was a big defining moment in my life,” he admitted. “It was tough for me to be away from football for a whole season because I had never really missed a lot of time playing the game since I started in second grade. I used practice as a way to work things out when I got mad, so not being able to play football for that period of time was stressful.

“It was something bad, but I’ve gotten a lot of good things from it. I’ve grown a lot from it. Being able to take the time to focus on school more…that was one of the biggest reasons I came back this year…to graduate. I always told my mom that I would get my college degree, and I get to be at Clemson another year. It’s all working out.”

His highly anticipated return came at Auburn earlier this season, and it was a game to remember, as Williams had nine receptions and 174 of the team’s 248 receiving yards.

“I was so excited to get back out on the field and play the game again. I had trained during fall camp, but it’s different when you actually get in a game. When that opportunity finally came, I took advantage of it, and I think I had a pretty good game and season since then.”

He has indeed had a strong 2016 season as Deshaun Watson’s favorite target. He earned ACC Receiver-of-the-Week honors after the Tigers’ game against Pittsburgh, when he had 15 catches for 202 yards. It was just the third 200-yard receiving game in school history. He was targeted 16 times in the game and caught 15 of the passes, including nine catches that gave the Tigers a first down.

But Williams has his mind set on more than just becoming one of the best receivers Clemson has ever seen.

“I want to finish out strong. I want to do whatever it takes to help my team win.”

The positive vibe of the team is something that has meant a lot to Williams, a feeling he believes is unique to Clemson’s program.

“My favorite memory here is meeting everyone. Just getting away from where I came from and coming here to Clemson…it’s totally different. I have a lot of positive people around me who are constantly encouraging all of us to make it. Everyone wants to see you make it, and that’s been the biggest thing.”

While the people that Williams has become acquainted with during his time at Clemson have changed his experience as a Tiger for the better, he hopes that his presence has also left an impact on others.

“I want to be remembered as Mike Williams,” he said of the legacy he wants to leave. “A cool, laid-back dude who always kept a smile on his face, even during the tough times.”

And to the people who help to create the family atmosphere that attracted Williams to Clemson in the first place, he has a special message.