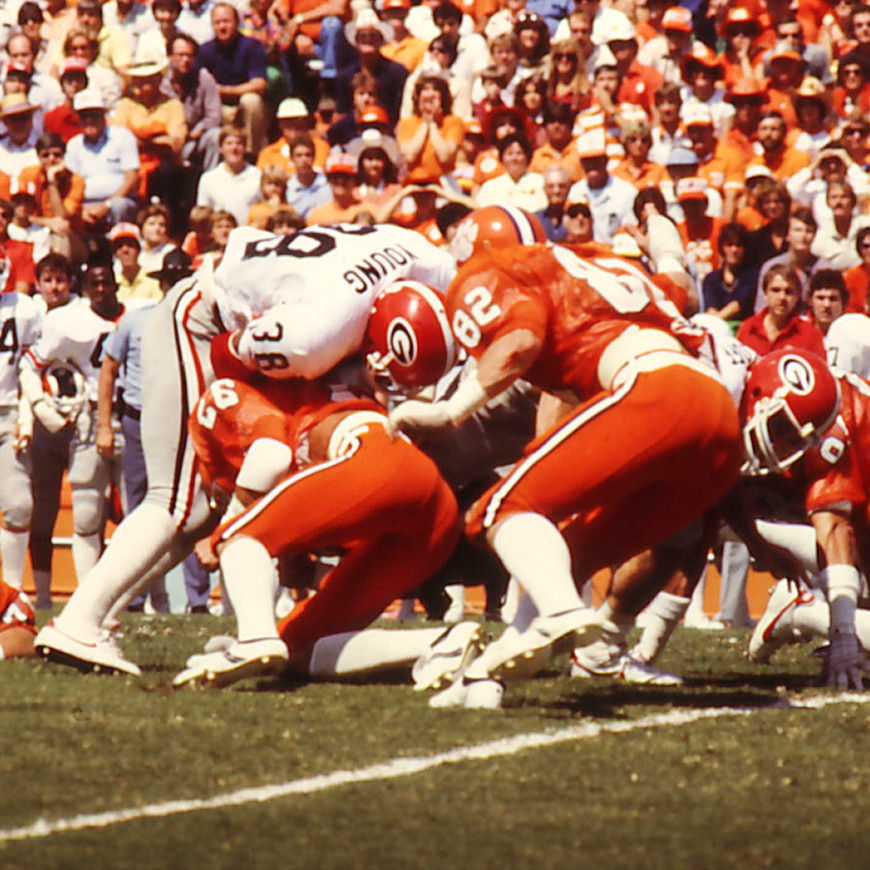 Editor’s note: This is the fourth in a series of the most memorable games in the history of Memorial Stadium, which is celebrating 75 years this season.

It was probably one of the most anticipated games ever in Death Valley…the defending national champion Georgia Bulldogs were coming to Clemson.

“I am anxious to go up against the top running back in the nation,” said Tiger senior linebacker Jeff Davis. “Last year (1980), Herschel (Walker) was a freshman who played like a senior. But it’s going to be different when he comes to Death Valley. He’ll find that he won’t be able to do as well against this senior.”

Davis showed his teammates he had the confidence to beat the defending national champions with that quote. It was quite a statement considering Georgia had not lost since Walker joined the lineup in 1980. In fact, Clemson’s 13-3 victory that Sept. 19 day would be the only regular-season loss of Walker’s three-year college career.

As it turned out for much of 1981, it was the defense that carried the day for Clemson. The Tigers forced nine turnovers (five interceptions, four fumbles), and 36 years later, that is still the school record. The nine takeaways were recorded by nine different players, the best stat that shows that this was an all-around team effort.

Georgia quarterback Buck Belue threw five interceptions and lost a fumble for six of the nine turnovers. Walker had lost just one fumble his entire freshman season when he gained over 1,600 yards, an NCAA freshman record. But he had three fumbles in this game, two that were recovered by the Tiger defense, including one by William Perry, when he seemingly shoved Walker aside with his brute strength to scoop up the ball.

Walker totaled 111 yards on 28 carries, but he never reached the endzone. In fact, Walker played three games against the Tigers in his career without scoring a touchdown, joining Heisman Trophy winner George Rogers (South Carolina) with that career note against Clemson’s defense.

This was a physical game from the outset, as the two teams combined for only 491 total yards. Clemson had just 236 yards, but still won by double-digits. Field position was a big factor, and punter Dale Hatcher was an unsung hero, as he averaged 43 yards on seven punts.

No. 4 Georgia’s only points came on a Kevin Butler field goal on the Bulldogs’ first drive of the second half. The Bulldogs had won 15 consecutive games, the longest active winning streak in the nation. They were the highest-ranked team Clemson defeated at home in the first 107 years of the program.

When Rod McSwain intercepted a pass in the endzone with 1:08 left to clinch the win, the defense came off the field whirling their index fingers. At the time, they were giving notice that they had defeated last year’s top-ranked team.

But as it turned out, that celebration was a foreshadowing of things to come. Jordan, a native of Athens, Ga., had 135 passing yards and a touchdown, and added 59 yards on 25 carries to lead the Tiger offense.

On a day when Clemson forced nine turnovers, Danny Triplett was the only Tiger defender to win ACC player-of-the-week honors. He had a career-high 11 tackles to help stuff the Georgia rushing attack.

Clemson went on to score 316 points in the 11 regular-season games of 1981, the exact same total Georgia scored the previous season when it won the 1980 national title.

The Tigers’ 13-3 victory finally put Clemson on the national map. The Tigers moved to No. 19 in the AP poll and No. 18 in the UPI poll after the victory.

“We’ve got no excuses,” said Walker. “They beat us. We made a lot of mistakes. They played a good game and we didn’t.”

“Georgia wanted to go toe-to-toe and jaw-to-jaw, and I think our guys accepted it real well,” said Clemson head coach Danny Ford. “That’s the same thing we told our players. We wanted to prove we could play with them…and we did.”