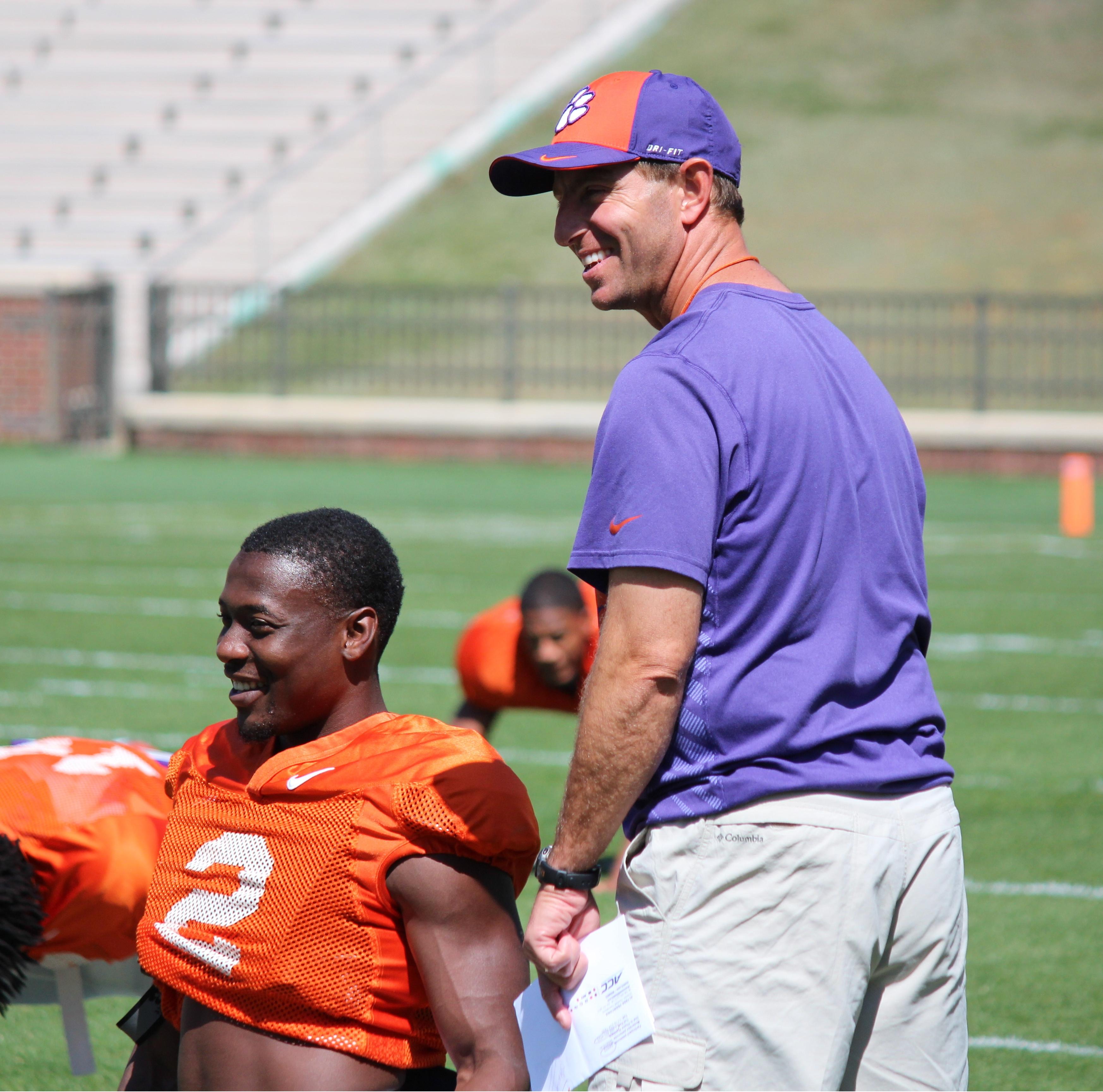 CLEMSON, S.C. – Dabo Swinney said his defense was ahead of the offense during Clemson’s second stadium scrimmage on Wednesday afternoon.  The Tigers worked for two hours and ran nearly 100 plays in perfect weather.  It was the last full scrimmage until the Tigers hold their Spring Game on Saturday, April 11 at 2:30 p.m. in Memorial Stadium on the Clemson campus.

Wednesday’s scrimmage was the last practice for the Tigers until Monday, as the team and coaching staff will have the Easter Holiday weekend off.

“We had some good plays on offense and ran the ball pretty well, but we didn’t find the endzone,” said Swinney of his offense. “Last time I checked you don’t get points for good plays.  We settled for too many field goal attempts. There were times we had missed assignments that led to negative plays.”

Swinney was pleased with the performance of his defense especially in key situations. “The defense was tremendous all day.  They might give up a big play, but they showed pride and rallied.  There were only two situations that disappointed me as far as the defense.  They allowed Zac Brooks to make a 44-yard run off the goal line to flip the field position, then gave up a touchdown in two plays during the two-minute drill near the end of the scrimmage.”

Some of the defensive leaders included safety Jayron Kearse, who had a 30-yard interception return for the second scrimmage in a row. He also had a tackle for loss and a pass deflection. Kaleb Chalmers had a 30-yard interception return.  Carlos Watkins had a sack, a tackle for loss and two blocked field goals. Kevin Dodd also had a sack.

Quarterback Nick Schuessler had another solid performance and completed 9-15 passes for 128 yards and a touchdown.  His scoring pass was a perfectly executed back shoulder throw to Mike Williams for a 60-yard touchdown during the two-minute drill.

Both freshman quarterbacks saw action in the scrimmage.  Tucker Israel completed a 38-yard pass to wide receiver Adrien Dunn. Kelly Bryant had a pair of 11-yard runs to help the running game.

The top rusher was Wayne Gallman, who had 15 carries for 51 yards and a score during a red-zone drill.  Brooks finished with 8-50 on the ground. Tyshon Dye scored two touchdowns during goal line plays and had a pair of receptions out of the backfield.

The top receiver was tight end Jordan Leggett, who had five receptions for 73 yards.  He caught a 35-yard pass from Schuessler on the first play of the scrimmage.

Swinney reported that there were no injuries.  He also said that tight end Jay Jay McCullough had returned to the team from a suspension.  He was held out of the scrimmage on Wednesday, but is expected to return on Monday.