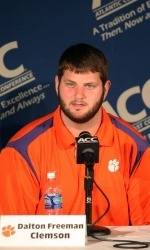 PINEHURST, NC – When his Wake Forest teammates got back from Clemson in 2009, Kyle Wilber heard all the stories on what he missed in the Tigers’ 38-3 victory at Death Valley.

Of course from a Wake Forest standpoint, he didn’t miss too much. On offense and defense, Clemson completely dominated the Demon Deacons thanks to a 66-yard touchdown run by C.J. Spiller and a Clemson defense that harassed Wake quarterback Riley Skinner all afternoon.

But, what Wilber’s teammates talked about the most when they got to Winston-Salem, NC later that night was how intimidating and loud Death Valley really was. “I have never been there, but I heard that place is amazing,” said Wilber, who missed the game because of a broken leg he suffered in the second game of the season that year. “The fans down there also tackle you. They are the twelfth man. The atmosphere down there is electric.”

In an unscientific survey taken during the first day of the ACC Football Kickoff Sunday, the 10 players in attendance – two from each school – who do not play for Clemson, unanimously declared Death Valley as the toughest venue to play at in the ACC.

“It is the toughest place that I have ever played at,” Maryland linebacker Kenny Tate said.

A lot of the players say the noise is what makes Clemson so difficult to play at. Clemson led the ACC in attendance last year and consistently is ranked in the top 15 nationally year in and year out.

Clemson fans are known as some of the most loyal and diehard fans in the country and opponents say it comes off when they make a visit there. Each Saturday more than 81,000 orange-clad fans fill up Memorial Stadium in hopes of inspiring their Tigers to victory.

And it works. Clemson has won around 75 percent of its games in Memorial Stadium since it opened its doors in 1942.

“It is the loudest stadium I have played in,” Tate said. “I don’t normally hear the crowd when I’m playing, but you can just hear the intensity flowing through the stadium.”

Clemson center Dalton Freeman says the crowd and the atmosphere at Clemson helps give them an advantage.

“It’s one of the reasons why I came to Clemson,” he said. “From the time you leave the locker room and board those buses and get to the top of the Hill, it is an unbelievable feeling. I get chill bumps right now thinking about it.

“It’s great to hear other players around the conference feel that way about Death Valley. It is something we are proud of, and we can’t thank the fans enough. We are going to go out there and do our best to give them something to cheer about this season.”

And that’s something Wake Forest offensive guard Joe Looney does not want to hear. “Clemson is a tough place to play,” he said. “The fans are wonderful. They really make it loud and that makes it hard for us. They let you know early that is going to be loud all day.”