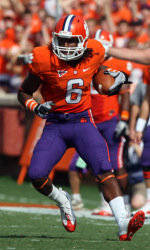 GREENSBORO, NC – Florida State senior left guard Rodney Hudson headlines a list of eight players recognized as the Atlantic Coast Conference Football Players of the Week, announced Monday by the ACC. Hudson registered two knockdown blocks while not missing an assignment or drawing a penalty in 62 snaps as the Seminoles topped rival Miami, 45-17. He helped FSU rack up 298 rushing yards, which marked the fourth-straight game with at least 200 yards on the ground, a feat not accomplished at FSU since 1995.

Hudson is joined by teammate Greg Reid, the specialist of the week selection. Georgia Tech’s Anthony Allen and NC State’s Russell Wilson were named co-offensive backs of the week. The Wolfpack earned two honors on the week as Brandan Bishop was tabbed defensive back of the week. North Carolina’s Kevin Reddick and Virginia Tech’s Bruce Taylor were this week’s co-defensive line honorees, while Clemson’s DeAndre Hopkins was recognized as the rookie of the week.

ROOKIE – DeAndre Hopkins, Clemson, WR, Fr., 6-1, 195, Central, S.C. (D.W. Daniel) Hopkins had seven receptions for 46 yards against North Carolina, the most receptions by a Clemson freshman in a single game in five years. Aaron Kelly had seven receptions against Temple in 2005 and that was the last time a Tiger rookie had that many catches in a game. Four of the receptions went for first downs, including three that were third-down catches that gave the Tigers a first down. He also had a 31-yard punt return that set up a Clemson touchdown in the second half.

CO-OFFENSIVE BACK – Anthony Allen, Georgia Tech, RB, r-Sr., 6-0, 229, Tampa, Fla. (Louisville/Jesuit) Allen rushed for a Georgia Tech career-high 195 yards and three touchdowns on 25 carries Saturday in the Yellow Jackets’ 33-21 win over Virginia. Allen, who eclipsed 1,000 yards for his two-year Tech career, had the second-most rushing yards in the Paul Johnson era. He helped the Yellow Jackets pile up 477 yards on the ground, which is the sixth-highest mark in conference history, and the most since 1981. Allen has five career touchdowns in two games against the Cavaliers.

CO-OFFENSIVE BACK – Russell Wilson, NC State, QB, r-Jr., 5-11, 201, Richmond, Va. (Collegiate) Wilson completed 38 of 51 pass attempts for 328 yards and three touchdowns. Wilson also carried the ball 14 times for 45 yards. Wilson set the tone early against the Eagles, completing his first four pass attempts and seven of his first eight. For the game, Wilson completed passes to 10 different receivers, the fourth time in six games this season that he has reached double figures in receivers. Wilson has now passed for 300 or more yards in a game five times in six games this season, and has done so nine times in his career. Among NC State quarterbacks, only Philip Rivers had more 300-yard passing games (19). Wilson threw at least three touchdown passes in a game for the fifth time in 2010, the 11th time in his last 17 games, and the 12th time in his career. Wilson also tied Rivers’ NC State single-game record with his 38 completions.

OFFENSIVE LINEMAN – Rodney Hudson, Florida State, LG, Sr., 6-2, 282, Mobile, Ala. (B.C. Rain) The Seminoles’ offensive lineman paved the way for another big performance by the FSU offense, which piled up 471 total yards in the 45-17 victory over Miami. Hudson matched his season-high by earning a grade of 94 percent (92 run/96 pass), which included two knockdown blocks. He did not register a missed assignment or draw a penalty in 62 snaps while leading a running attack that piled up 298 yards on just 40 carries (7.4 ypc). It was the fourth consecutive time that the Seminoles racked up 200+ rushing yards. FSU last matched that feat in 1995. In addition to paving the way for the ground attack, Hudson played a significant role in holding Miami’s pass rush in check. Miami came into the game second in the nation in sacks and was held in check for the first time this season.

CO-DEFENSIVE LINEMAN – Kevin Reddick, North Carolina, LB, So., 6-3, 230, New Bern, N.C. (New Bern/Hargrave) Sophomore middle linebacker Kevin Reddick posted 10 tackles, assisted on a tackle for loss and had two pass breakups in a 21-16 win over Clemson. Reddick was part of a UNC defense that held Clemson to its lowest point total of the season and held the Tigers to 305 total yards of offense.

CO-DEFENSIVE LINEMAN – Bruce Taylor, Virginia Tech, ILB, r-So., 6-2, 246, Myrtle Beach, S.C. (Myrtle Beach) Taylor had a game-high 13 tackles, including two for loss and a pass breakup as the Hokies downed Central Michigan 45-21. He leads the team in both tackles and tackles for loss. His 1.92 TFL per game ranks ninth nationally and third in the league. He is sixth in the conference in tackles with 49.

DEFENSIVE BACK – Brandan Bishop, NC State, S, So., 6-2, 210, Boca Raton, Fla. (Boca Raton) Bishop came off the bench against Boston College and had three tackles and two interceptions in 48 plays. His two interceptions – one midway through the second quarter and one late in the fourth – yielded 15 yards in returns. Bishop’s first interception, which came in the second quarter, gave NC State the football in Boston College territory, setting up the team’s third touchdown and a commanding 24-3 lead.

SPECIALIST – Greg Reid, Florida State, CB, So., 5-8, 174, Valdosta, Ga. (Lowndes County) Reid was a central figure in Florida State’s ability to win the field position battle throughout the night in a 45-17 win over Miami. He registered a career-high 145 kickoff return yards on four attempts (36.25 avg.), including a season-high 55 yarder, in response to Miami’s first touchdown of the game. That 55-yarder led to a Dustin Hopkins field goal and a 24-7 halftime lead by the Seminoles. Reid returned the opening kickoff of the second half 22 yards to the FSU 31 to set up a 69-yard touchdown drive and added a 50-yard kickoff return late in the third quarter after the `Canes had scored 10 unanswered points. The elusive sophomore also added two punt returns for 16 yards (with a long of 17) and added six solo tackles, including a tackle for loss, and two pass breakups from his cornerback position.