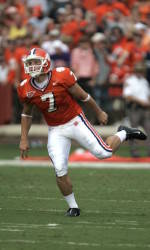 Dean Nominated for National Player of the Week

ATLANTA, Ga. (September 4, 2005) – The national player of the week nominations are in and the polls are officially open. Tiger fans can cast their vote for Clemson University junior kicker Jad Dean for the Cingular Wireless/ABC Sports All-America Player of the Week, the only major college football honor determined exclusively by fans. Dean was nominated for the award after kicking a school-record six field goals, including the 42-yard game winner, in the Tigers’ 25-24 win over Texas A&M Saturday. He is the first kicker to ever be nominated for the award.

Who will be this week’s winner now rests solely in the hands of college football fans nationwide. Fans have until Wednesday, September 7 at 11:59 p.m. EST to submit their votes via wireless text messaging.* The winner will be announced September 8 in the first half of the ESPN Thursday Night College Football Game between Oklahoma State and Florida Atlantic. Fans can learn more about this week’s nominees online at www.abcsportsallamerica.com or at ESPN.com (keyword: cingular).

Here’s how fans can register to vote for the Cingular/ABC Sports All-America Player of the Week this week and every week throughout the 2005 season:

Each time fans vote, they are entered into a sweepstakes to win a trip to the Bowl Championship Series game of their choice. Fans can vote as often as they like.