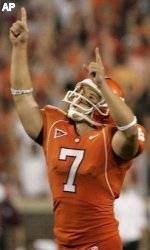 ACC Football Players of the Week

Wake Forest running back Micah Andrews rushed for 254 yards on 34 carries in Thursday’s 24-20 loss to Vanderbilt, turning in the second-best single-game performance by a running back in school history. The sophomore from Duluth, Ga., was making just his second career start, and became just the eighth player in school history to rush for more than 200 yards. Andrews finished with an average of 7.5 yards per carry and had 278 all-purpose yards.

Georgia Tech tackle Brad Honeycutt was the Yellow Jackets’ top lineman in their 23-14 victory over No. 16 Auburn on Saturday. The senior from Mesquite, Texas, recorded 14 knockdown blocks in his first game at tackle after playing at guard for the last two seasons, including several key blocks to help pave the way for P.J. Daniels to rush for 111 yards against one of the nation’s strongest defenses.

Florida State defensive end Kamerion Wimbley and Maryland linebacker D’Qwell Jackson share defensive line honors in the first week of the season. Wimbley, a senior from Wichita, Kan., had five tackles, including four solo stops, in the Seminoles’ 10-7 win over No. 9 Miami on Monday. Credited with eight quarterback hurries, Wimbley recorded two of FSU’s nine sacks and was part of a defensive unit that forced three turnovers and limited the Hurricanes to just 25 percent on third down conversions (4-for-16). Jackson, a senior from Largo, Fla., tied his career high with 18 tackles, including nine solo stops, in Maryland’s 23-20 win over Navy on Saturday. Jackson had at least one tackle on each of Navy’s 10 drives and made four stops on third down to deny the Midshipmen of a first down. He also added a sack on the day.

Virginia Tech strong safety Aaron Rouse accounted for all three of the Hokies’ forced turnovers in Virginia Tech’s 20-16 road win over NC State on Sunday. The Virginia Beach, Va., junior forced a fumble and had two interceptions, including one on the final play of the game to seal the win for the Hokies. Roose also added eight tackles in his first start at the strong safety position.

Clemson place kicker Jad Dean became just the second player in ACC history to go 6-for-6 in field goal attempts in a game on Saturday, leading the Tigers to a 25-24 win over No. 17 Texas A&M. The Greenwood, S.C., junior booted field goals of 44 and 42 yards, the latter of which came with two seconds left on the game clock to give Clemson the upset win. Dean set new school marks in field goals made and kick scoring points (19) and has converted 11 straight field goal attempts over the last two years.

Clemson running back James Davis rushed for 101 yards on 19 attempts to lead the Tigers in rushing in their 25-24 upset of No. 17 Texas A&M on Saturday. The Atlanta, Ga., native became the first Clemson freshman in 60 years to post at least 100 yards in his collegiate debut. Davis had eight carries for 33 yards on Clemson’s final drive, game-winning drive.