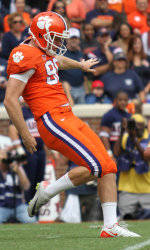 The award is named after former Heisman Trophy winner Danny Wuerffel, who led the Florida Gators to the 1996 national championship, played six years in the National Football League and has received national recognition for his humanitarian and community service efforts with Desire Street Ministries in New Orleans and around the country.

“The All Sports Association is proud not only of this year’s Wuerffel Trophy finalists, but all of the nominees,” commented All Sports President William Thomas. “These young men set such a great example for others.”

The finalists, who were nominated by their schools’ sports information directors or football liaisons, are (listed alphabetically by university):

A committee that includes the Wuerffel Trophy national directors, selection committee members and past winners, will vote on the finalists later this month, and the winner will be formally announced on December 6th.

“Once again, I’m amazed at the quality of character and accomplishments we have in our finalists. These young men have succeeded both on and off the field in extraordinary ways. It’s definitely going to be a tough process for the selection committee to pick winner,” said Danny Wuerffel.

The 2011 Wuerffel Trophy will be presented to the winner at the All Sports Association’s 43rd Annual Awards Banquet on Friday, February 17, 2012.