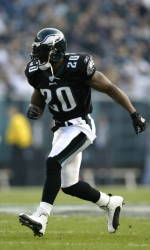 Clemson, SC-Former Clemson All-American Brian Dawkins has been named to the NFL Pro Bowl for the seventh time in his celebrated career. With the selection, Dawkins has now been named to his league’s all-star game more than any other former Tiger in any sport.

Dawkins and former Clemson All-American Michael Dean Perry had the previous record with six selections apiece. But, Dawkins now stands alone with a seventh selection. Dawkins has also made the Pro Bowl after the 1999, 2001, 2002, 2004, 2005 and 2006 seasons.

This season, Dawkins has 123 tackles, third best on the team, an interception, a team best four caused fumbles, a fumble recovery and five passes defensed, helping the Philadelphia Eagles to an 8-5-1 record and playoff contention. He has played 181 games, all with the Eagles, a recently established franchise record. He has 34 career interceptions and 20 career sacks.

“When I got the news from (head coach) Andy (Reid) it almost felt like my first time, how excited I was,” said Dawkins when told he had been named to the Pro Bowl. “Just knowing how much that I have been through these last couple of years with the birth of my babies and all the things I went through with the injuries and all the questions surrounding me and my play, of my age. So many things have gone on that I’ve had to stay strong through with my faith that this is definitely a blessing from above.”