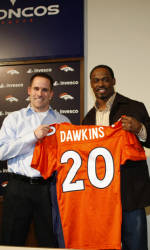 Dawkins has been named to the Pro Bowl more than any other former Clemson player. Michael Dean Perry, who also played for Denver at one time, is second with six selections.

Dawkins, who starred at Clemson from 1992-95, is now among the top four safeties in the history of the National Football League in terms of Pro Bowl selections. In his first year in Denver, Dawkins has made an immediate impact, helping the Broncos defense rank second against the pass and fifth in the league in total defense. Through 15 games, the 14-year veteran — who finished second among AFC strong safeties in fan voting — has 108 tackles, two interceptions, one forced fumble and 11 passes defensed.

In November, Dawkins was listed to the NFL’s All-Decade Team by SI.com writer Peter King.