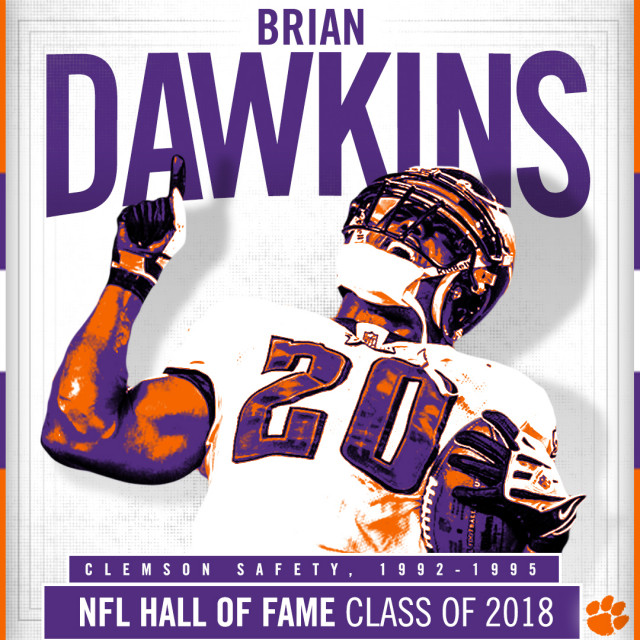 During the 1995 season, Dawkins had 89 tackles, including 60 first hits in starting all 12 games. He had six interceptions to lead the ACC and rank eighth in the nation, for 55 return yards and a touchdown. He also had nine passes broken up to lead a Clemson defense that finished 10th in the nation in scoring defense and 16th in pass defense.

He tied a Clemson record with three interceptions against Duke in 1995. All three of the thefts came in one quarter, still the only Clemson player to have three thefts in a quarter.   He was named National Defensive Player of the Week by Sports Illustrated for that performance against the Blue Devils.

The Clemson graduate finished his career with 15 takeaways, still tied for fifth in school history, as he had 11 interceptions and four fumble recoveries. He finished with 251 total tackles in 46 games, 35 as a starter. He had four fumble recoveries, four forced fumbles and three blocked kicks. He had two sacks and nine tackles for loss to go with 23 passes broken up and 34 total passes defended.

Dawkins played in the 1996 Senior Bowl, then was drafted in the second round by the Philadelphia Eagles, the 61st selection of the draft.

Dawkins played 16 years in the National Football League between 1996 and 2011, He played with the Eagles from 1996-08 and with the Denver Broncos from 2009-11. His uniform number-20 has been retired by the Eagles, one of just nine players in the 80 years of that franchise so honored.

The native of Jacksonville, Fla. is one of just six players in NFL history with 25 sacks and 25 interceptions in his career. He’s the only player in NFL history to record a sack, interception, fumble recovery and touchdown catch in same game against the Houston Texans in 2002. Dawkins was selected as a First Team member of the Pro Football Hall of Fame All-Decade Team in the 2000s.

“Brian Dawkins has represented this football program, this University, with distinction for over 25 years,” said Clemson Head Coach Dabo Swinney. “He had a terrific career at Clemson, then had an even better career in the NFL with Philadelphia and Denver.

“It was not just his accomplishments on the field, it is his character, his leadership, the respect that people have for him, that stand out. For years I have dealt with NFL scouts, coaches, and general managers and I can’t tell you how many times they have told me stories of Brian Dawkins.

“Now with his selection, he is the first former Clemson football player to be inducted into the NFL Hall of Fame. It is a fitting honor.”