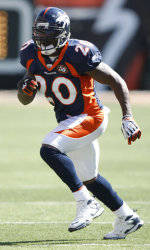 This is the ninth Pro Bowl selection for Dawkins, more than any former Clemson player. This past season he had 51 tackles, one forced fumble and three sacks in helping the Broncos to the NFL playoffs.

Dawkins just finished his 16th season in the NFL, his third with the Broncos. He was named to the Philadelphia Eagles all-time team in 2008, as he played 13 years with that franchise. He was named to the NFL’s All-Decade team for the 2000s. He finished he 2011 season with 1131 career tackles, 37 interceptions and 26 sacks. He is one of just 10 players in NFL history with at least 20 interceptions and 20 sacks.

If he plays for the Broncos next season, he will become the first NFL safety in the history of the league to play 17 years in the NFL at that position.