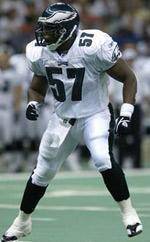 Former Clemson All-America defensive players Brian Dawkins and Keith Adams will compete for the Philadelphia Eagles against the New England Patriots in the 2005 Super Bowl on Feb. 6. The Eagles defeated the Atlanta Falcons 27-10 on Sunday to advance to the Super Bowl for the first time since the 1980 season.

Both Dawkins and Adams started for Philadelphia’s defense on Sunday and were both key reasons the Falcons scored just 10 points and picked up just 202 yards of total offense. Dawkins had an interception, while Adams was the second leading tackler for the Eagles from his linebacker position with seven total tackles.

For the regular season, Dawkins had four interceptions and 69 tackles, including three sacks. The strong safety in his ninth season was named to the Pro Bowl and was chosen to the Associated Press All-Pro team. Adams started the last five games of the year and finished the regular season with 46 tackles and two caused fumbles. Dawkins received his degree from Clemson in 1996.

Dawkins played at Clemson between 1992 and 1995. He was a second-team All-American according to Associated Press and The Sporting News as a senior in 1995 when he ranked eighth in the interceptions with eight. He was named Sports Illustrated’s National Defensive Player of the Week when he had three interceptions in one quarter against Duke that year.

Adams played for current Clemson head coach during the 1999 and 2000 seasons when was a two-time All-American. In 1999 he established Clemson record for tackles for loss (35), total tackles (186) and sacks (16) in one season. He was a finalist for the Butkus Award and the Bednarik Award in 2000 when he helped Clemson to a 9-3 season. He established 14 Clemson defensive records in his career and was a consensus All-American in 2000 as a junior. He decided to enter the NFL draft after his junior year.

Clemson has had at least two players from the same team play on Super Bowl Championship teams six times. The most recent occurrence took place in 1999 when Dexter McCleon and Tony Horne played for the World Champion St. Louis Rams.

Note: Year is season, not year game was played #Replacement player during regular season, but NFL considers him to be member of the team’s official roster for that season.