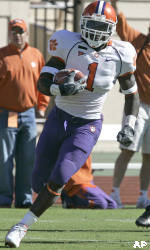 “The injury is not serious,” said Clemson Head Coach Tommy Bowden. “We know what James can do.”

Davis enters his senior year with 3130 career rushing yards, third in the nation among active running backs. His total is also second in Clemson history. He has gained at least 1000 yards in each of the last two seasons.

Bowden announced that Rendrick Taylor, had returned to the offensive side of the ball. Taylor played wide receiver his first three years, then moved to linebacker for the first four spring practice sessions. But, Taylor asked to return to offense after last week’s last practice. He will work running back or receiver the remainder of the spring. He worked at both positions last spring as well. He worked at running back on Monday.

Wide receiver Stanley Hunter, who had seen limited action in practice prior to spring break, were upgraded to green jerseys on Monday, meaning they have limited contact work. Freshman Tarik Rollins, a linebacker from Jacksonville, FL is still limited while recovering from a torn ACL, as is defensive back Haydrian Lewis.