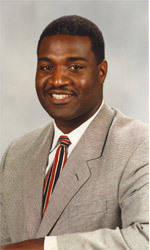 Clemson, SC-Former Clemson All-America linebacker Jeff Davis is one of 77 players and seven coaches who comprise the 2006 Division I-A ballot for induction into the College Football Hall of Fame. The announcement was made by the National Football Foundation.

This is the second consecutive year Davis has been named to the ballot. The Hall of Fame Class will be announced at a press conference at the Marriott Marquis in New York City on May 16. the 49th Awards dinner will be held at the Waldorf-Astoria in New York on December 5, 2006.

Davis was the defensive captain of Clemson’s 1981 National Championship team that had a perfect 12-0 record. He was the ACC Player of the Year and a consensus first-team All-American that season. The native of Greensboro, NC was a two-time first-team All-ACC player in 1980 and 1981. He recorded 469 tackles in his career, still third in Clemson history. He is now an assistant athletic director within the Clemson Athletic Department.

Davis is attempting to become the second member of Clemson’s National Championship team to be honored in the College Football Hall of Fame. Terry Kinard was inducted in 2001.