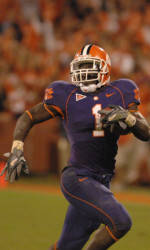 Davis rushed for a career-best 216 yards and two touchdowns as 12th-ranked Clemson defeated 13th-ranked Georgia Tech, 31-7 on Saturday evening at Death Valley. Davis scored on runs of two and five yards and had a pair of runs over 50 yards in gaining the most yards rushing by a Clemson running back since Raymond Priester gained a school record 263 yards against Duke in 1995.

Davis helped the Tigers improve to 7-1 overall, 4-1 in the ACC with the victory. He is now leading the ACC and ninth in rushing with 120.13 yards per game, and is second in the nation in scoring with 12.0 points per game. He has scored 16 touchdowns so far this year, just two short of the Clemson single season record.