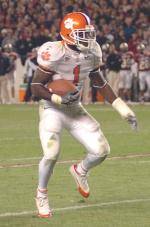 OFFENSIVE BACK Clemson running back James Davis led the Tigers in rushing with one touchdown and 145 yards on 27 carries in a 13-9 win over No. 19 South Carolina on Saturday. James, a freshman from Atlanta, Ga., scored the game’s only touchdown on a 2-yard run with 5:58 left in the fourth quarter, giving Clemson its first and only lead of the day. James also had a 23-yard run earlier in the drive, setting up his winning score. James ran for 114 yards in the second half, and his 145 total yards were the fourth-most in a single game by a Clemson freshman in team history.

OFFENSIVE LINE Virginia Tech outside guard/center Will Montgomery graded out at a team-high 93 percent on 60 plays in the Hokies’ 52-14 win over Virginia on Saturday. The senior from Clifton, Va., had a team-high four knockdowns in the win, and was a crucial part of an offensive line that opened holes for 333 rushing yards and 503 yards of total offense.

DEFENSIVE LINE Virginia Tech defensive end Darryl Tapp had had six tackles, including 2.5 for loss, in the Hokies’ 52-14 win over Virginia on Saturday. Tapp, a senior from Chesapeake, Va., also had two sacks and two quarterback hurries in the winning effort.

DEFENSIVE BACK Georgia Tech outside linebacker KaMichael Hall helped the Yellow Jackets hold No. 3 Miami to just 30 yards rushing and 237 yards of total offense in a 14-10 Georgia Tech win on Saturday. Hall, a junior from Houston, Texas, had four tackles for loss in the second half, including two sacks. Hall also recorded a pass break up and had a key fourth-down stop in the fourth quarter. With the Hurricanes deep in Georgia Tech territory and facing a fourth-and-one at the 12-yard line, Hall came up with a tackle for a three-yard loss. Hall was part of a defense that held Miami to just one third-down conversion on 14 attempts and an 0-for-2 effort on fourth down on the evening.

SPECIAL TEAMS Georgia Tech punter Ben Arndt had a pair of big plays in the Yellow Jackets’ 14-10 win over No. 3 Miami on Saturday. With Georgia Tech forced to punt from its own 21-yard line with just under three minutes remaining in the fourth quarter, Arndt reeled off a 78-yard punt that was picked up at the Miami 1-yard line and returned to the 11. In the first half, the redshirt senior from Young Harris, Ga., made a touchdown-saving tackle on a Miami punt return. Arndt punted nine times in the game, averaging 40.3 yards per punt, with a net of 38.1. He put four punts inside the 20-yard line and had two kicks of more than 50 yards. His 78-yard effort was the fifth-longest in school history.

ROOKIE Virginia Tech tailback Branden Ore led the Hokies with two touchdowns and 115 yards rushing in the Hokies’ 52-14 win over Virginia on Saturday. Ore, a redshirt freshman from Chesapeake, Va., averaged 7.7 yards per carry and had scoring runs of 7 and 31 yards in the third quarter. Ore also caught a 10-yard pass in the game.