Davis Allen | Making His Own Name

Approximately 121 miles from Clemson’s campus in the small town of Calhoun, Ga. lies Calhoun High School, the place where senior tight end Davis Allen made his name. While he was a sought-after recruit in high school, Allen did not think football was his ticket to Division I athletics. Allen shined on the baseball diamond, but after hitting some roadblocks during his junior baseball season, football became his future.

After receiving offers from major football programs, Allen knew he would soon be following in both his father’s and brother’s footsteps. Football has always been an important part of Allen’s life. His father, John, was a linebacker at Georgia from 1988-91, and his brother was a defensive end at Air Force.

Growing up, Allen spent much of his childhood at Georgia’s Sanford Stadium, cheering on the Bulldogs. Allen has idolized his father since childhood and saw him as a huge role model as a person and athlete. His father poured into him and supported him in every way as a person and as an athlete, and Allen wanted to be just like his father.

But the Georgia native noticed that there was something in these hills. When Clemson came into the picture during his senior year of high school, Allen noticed that the culture at Clemson was different.

“It was a no-brainer, honestly. After a couple of visits, I knew.”

Allen wanted to be a part of a program that was more than just football. He wanted to invest in his future outside of the game and as a person.

The tight end has 52 receptions for 576 yards and seven touchdowns in 42 career games. The preparation Allen has put in during every offseason to perform at a high level is an example for all of his teammates.

The coaching staff raves about Allen’s work ethic and mentality, with many remarking that he works like an NFL player. During the offseason, Davis emphasized getting 100-percent healthy, eating right, weight training and receiving the essential treatments to prepare for the season.

During the season, Allen does everything necessary to understand why he does what he does and the big picture of the offense. He spends countless hours staying late after practice to study film.

Allen started playing the sport at a young age in recreational leagues in Georgia with Clemson’s own Brannon and Baylon Spector. Brannon and Allen have been side by side since their second-grade class that united them at the age of seven. They have been lifelong friends on and off the field.

Despite the two-year age gap, Baylon has always been there for Allen, as they even played high school and recreational football together growing up. The Spectors have helped give Allen his home away from home.

“We want to show people how good we are. Coach (Brandon) Streeter and Coach (Dabo) Swinney help feed that fire.”

During his time at Clemson, Allen has had multiple coaches who have made lasting impacts on his life. He has had the opportunity to work with three different tight-end coaches in addition to Swinney and Streeter.

“Working with Coach Streeter and Coach Swinney has always been a blessing.”

Allen could easily connect with Swinney and Streeter, as he sees many of his father’s traits in them. The coaching staff holds everyone to a high standard and strives to connect with every athlete outside of football. Just like his father, Swinney always makes an effort to connect with players on a personal level every day. He is truly a player’s coach.

Majoring in marketing, interning at Elliott Realty in Myrtle Beach, S.C. and becoming a P.A.W. Journey ambassador, Allen has set himself up for a bright future. P.A.W. is an acronym for “Passionate About Winning” and encourages personal growth through every stage of life. This Clemson initiative holistically aims to develop Clemson football scholar-athletes outside of the game.

Allen is very grateful for this opportunity, as he now has a platform to help his teammates grow as men and develop, not only professionally, but also to encourage success in their communities and households.

“It is honestly a pretty big deal. We are the ambassadors for the team. It is a special thing.”

This player investment is paying dividends thanks to the P.A.W. Journey program. It has helped Allen explore career opportunities after football. His ultimate dream job outside of football is to run his own non-profit organization or to coach the next generation of football players to give back to the system that allowed him to play in Tigertown.

Needless to say, #84 has always been “All In” during his Clemson experience. His final months as a Tiger will not be taken for granted, as Allen will do whatever it takes to help bring success to the Clemson program. 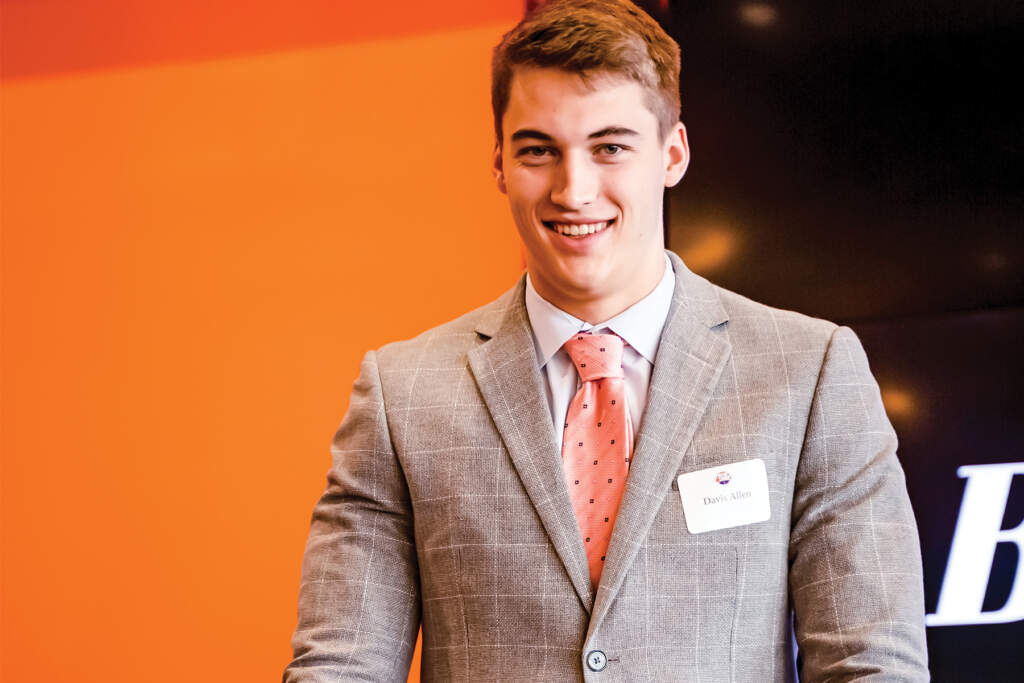