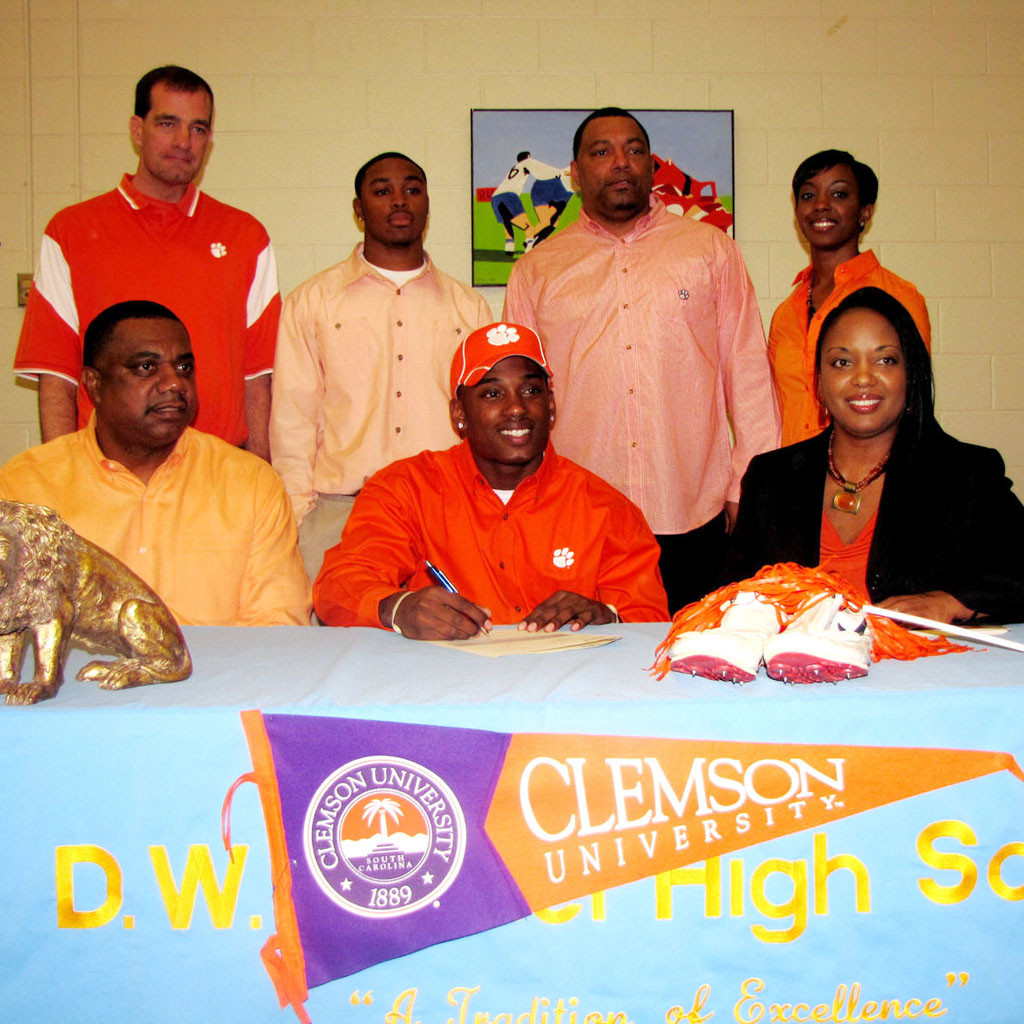 For many, the sports of football and track & field are linked. You don’t need to look any further than Clemson’s decorated history in both to find athletes that stood out on the gridiron and inside the track. Names like Jerry Butler, Jacoby Ford, C.J. Spiller and James Trapp fill the pages of the Tiger record books.

The latest to do both hasn’t done so in the same conventional method as the others before him. C.J. Davidson doesn’t split time between the two sports. In fact, he came to Clemson as a scholarship long jumper. Just look at the photo of Davidson in this article. It’s from 2011 National Signing Day. The shoes on the table in front of Davidson are track spikes, not football cleats.

Though he played just down the street at D.W. Daniel High School, Davidson didn’t yield any major scholarship offers for football. Despite the fact he rushed for 1,300 yards as a junior in 2009 — DeAndre Hopkins’ senior year at Daniel — he received little attention from college recruiters.

So Davidson competed for Tiger track & field in 2011-12, long jumping a season-best 23-8.75 in one of his first competitions. But he suffered an injury his freshman year and was discouraged. He tried out for football and wanted to see how far he could take it, but in the back of his mind always thought he would return to the track team.

Davidson made the cut and played his first career game against Duke on Nov. 3, 2012 with the Tigers’ special teams. A week later, he was in the backfield earning carries against Maryland. His track days were over.

“It’s amazing to have a player as talented as C.J., who basically walked in off the street to us two years ago,” said head coach Dabo Swinney.

In 2013, Davidson’s second season with the program, he rushed for four touchdowns and snagged three receptions for 27 yards in the Orange Bowl victory over No. 6 Ohio State.

“It’s been a long journey, one full of hard work,” Davidson said. “I’m not there yet, but I work every day to get there. I just want to contribute to the team. Hopefully my role will grow bigger.”

One thing that’s grown bigger is Davidson’s frame. After entering school at just over 180 pounds in August 2011, he’s beefed up to over 200 currently.

“I’m excited about showing this 203 on them,” Davidson joked Tuesday when asked what he looked forward to when putting on full pads for the first time this preseason.

There’s certainly no joking when it comes to Clemson’s running back competition. The past two years, Clemson has graduated its leading rusher in Andre Ellington — now with the NFL’s Arizona Cardinals — and Roderick McDowell. Both netted over 1,000 yards from scrimmage.

Davidson is part of a “by committee” approach at the position with players such as D.J. Howard, Zac Brooks and Wayne Gallman. He said all the backs are tight off the field, but fiercely competitive on it.

“(We’re a) very competitive group,” he said. “It’s bittersweet coming out here every day; you can never take a day off. But with that, the production level is going to keep ascending every day.

“The way I see it, all the running backs contribute greatly. It’s going to be a special year.”

Take it from Davidson, a special athlete.