Many kids in the Upstate of South Carolina have dreams of wearing the famous Tiger Paw on their helmet and running down the Hill during the “most exciting 25 seconds in college football” in front of 80,000 fans. For Darien Rencher, this dream that so many young kids have has become a reality.

Growing up just 30 minutes from campus in nearby Anderson, S.C. and the son of two Clemson graduates, Rencher was born to be a Tiger. But if you ask Rencher, it is just a part of the journey.

Some of Rencher’s earliest memories were spending Saturdays with his family watching the Tiger teams of the early 2000s play under the lights in Memorial Stadium.

“I grew up always watching Clemson and used to come to the games and slide down the Hill on cardboard boxes and near the WestZone before it was there. I have a lot of awesome memories from Death Valley growing up.”

Rencher had some opportunities to play elsewhere after graduating from T.L. Hanna High School, but knew he wanted to be a part of something special, so he decided to walk on at Clemson.

“Coach (Dabo) Swinney had built something special and I wanted to be a part of it. To think that I could go to my parents’ alma mater and stay close to home and win the right way…it was a no-brainer.”

Even though he started his career as a walk-on, #21 quickly elevated himself to be a leader on a team filled with blue-chip recruits. He has not only left his mark on the Clemson football program, but also the surrounding community, not just as a football player, but as a leader.

Earlier this season, Rencher was named to the AFCA Good Works Team. Last year, Rencher received the Disney Spirit Award, which is given to college football’s most inspirational player.

Rencher has been a staple in the Upstate community, serving as a frequent community servant and public speaker. Before the 2020 season, he helped organize the Clemson Community Peaceful Demonstration, which promoted racial equality, and helped mobilize players nationwide to rally in support of playing safely during the pandemic in 2020. As recently as this year, he was named the Community MVP for Clemson, as nominated by Swinney at the South Carolina Coaches For Charity event benefiting the Fisher DeBerry Foundation.

Also this past summer, Rencher took advantage of the new NIL legislation, which allows student-athletes to receive compensation from their name, image and likeness. He has his own show called The Players Club Podcast. Rencher sees this opportunity of a podcast as practice for his future career and his path after football.

“I want to get into sports broadcasting once football is over and talk in front of a camera. I interned with Maria Taylor and met a few agents. They told me that I should start my own podcast and take advantage of my platform now so that I can get some practice.”

With the help of NIL, Rencher was allowed to pursue his passion and start his new podcast with all the equipment covered.

“One of my friends set up a meeting with Embassy Row, and they wanted a college football presence and to help fund it, so we made a deal and they do the editing. I can just show up and be the personality.”

Rencher has had a lot of guests that Tiger fans would be very familiar with, such as James Skalski, Justyn Ross and former quarterback Chase Brice, who have all joined the show.

“I understand my audience and I try to get guys who Clemson fans would want to hear from so they can hear their stories.”

Rencher credited Clemson’s P.A.W. Journey for laying the foundation of how to present yourself in a professional manner and the plan that it had in place so he could be successful during the NIL era.

“Clemson has been helping us make our brand before NIL even became a thing. Clemson was ready for it. P.A.W. Journey told us the man makes the brand, so through internships, I gained valuable experience in front of a camera and met some great people. I have success in NIL because of the person I am and the values I stand for.”

Rencher’s dream of playing for Swinney was better than he could have ever imagined as a local kid who gets to live out his dream every Saturday.

“It was better than I thought it would be. I came here as a fan really excited to play. Now, this is an actual family…this is home. I feel like I have left my mark here.

“It is truly special because you get to be a part of something special. I am about to get my second degree, I have won a championship every year I have been here and have made big plays on the biggest of stages. I could not imagine my life without coming to Clemson.”

Rencher’s journey is truly special, from walk-on to team leader to sports personality. It is just the beginning for the local product who just wanted to be a part of something special. 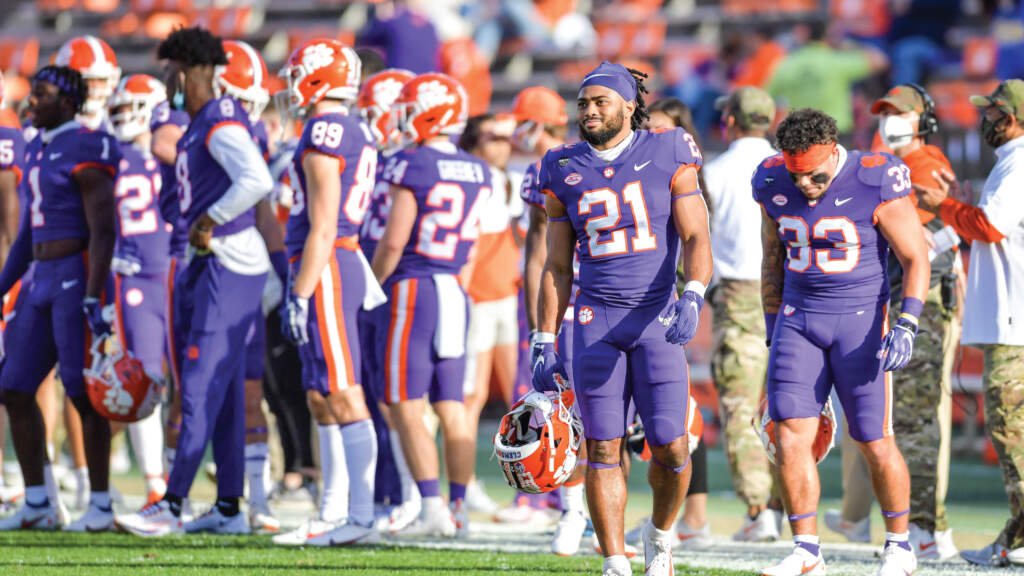